Idaho State University senior Jeffrey Gower doesn’t think he was destined for the pharmaceutical industry, but he takes a humorous edge to his choice of profession. He and the pharmacist in the film “It’s a Wonderful Life” share the same last name, he says. 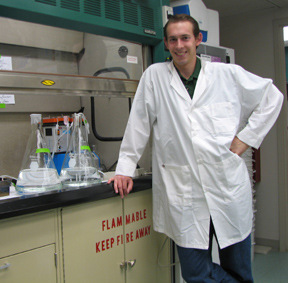 But that’s not what got the Pocatello native interested in pharmacy. Coming back from a Church of Jesus Christ of Latter-day Saints church mission in Germany, Gower says he decided he wanted to interact on a greater level with people. Engineering was something he felt wouldn’t satisfy his interest in that interaction.

Now, Gower is set to enter the ISU’s College of Pharmacy and was one of 30 undergraduates to conduct biomedical research this summer with a 10-week, $5,000 fellowship from the Idaho Institutional Development Award (IDeA) Network of Biomedical Research Excellence (INBRE).

Gower is studying the effects of alcohol on the brain. In his experiments on rats, blood samples were taken to study the concentrations of Adrenocorticotropic hormone (ACTH), a hormone that is secreted by the anterior pituitary in the brain in a signaling pathway that experiences a stressor.

Gower and his mentor administered the stressor—a dose of ethanol directly to the brain to ensure they were witnessing the effect of alcohol on the brain alone, versus the entire body. Gower’s focus within the brain was the region responsible for the stress response.

Eventually Gower says such information could help researchers understand the potential for drugs to block the stress response. The study could help lessen the physical effects of alcohol, especially in those suffering from heightened responses to stress.

Gower noted that the study is related to recent research conducted in the Selvage laboratory which has shown that the combination of estrogen in pre-menopausal women and alcohol results in amplified effects of alcohol upon the female body. He said understanding the effects of alcohol on the brain could also relate to differences between males and females with alcohol-related problems, so more specific treatments could eventually be developed.

Selvage’s lab is working in cooperation with researchers at the Salk Institute, a non-profit research organization in San Diego.

Outside the lab, Gower taps into his musical side. He’s played the piano for 15 years and sang for 5-6 years. He also made an appearance in Idaho State University’s musical, “Pippen” last semester. He likes to camp and hike at Alturas Lake in the Sawtooth National Recreation Area, though soccer is his favorite sport. Gower is also a member of the Idaho State University chapter of Gamma Beta Phi, a national honor society and service organization.

Gower visited Germany from 2004 to 2006. He began school at Brigham Young University-Provo in the fall of 2006 and will graduate from Idaho State University’s College of Pharmacy four years from now.

The Idaho INBRE program was established through a five-year, $16 million grant from the National Institutes of Health. It is charged with the task of increasing biomedical research conducted in Idaho in addition to improving research opportunities for faculty and students at all of the state’s universities and colleges.

This story was written by Kimberly Hirai, Idaho INBRE Program writer, (208) 830-9226 or kimberly.hirai@vandals.uidaho.edu