Hitting a baseball in the big leagues is among the most difficult feats in professional sports, some like to say, and that includes Idaho State University biological sciences professor Curt Anderson.

A hitter only has about 4/10ths of a second to react to a pitch coming at speeds approaching 100 miles per hour, and then to swing at and hit the baseball. A batter connecting with a baseball in such conditions completes an amazing athletic feat, but, in the animal world, this is a paltry effort. Consider this, when a toad catches an insect with its tongue, it does so in 15 to 22 milliseconds – that is 15/1000ths to 22/1000ths of a second. It happens so fast you need slow-motion technology of a filmed sequence to see it. 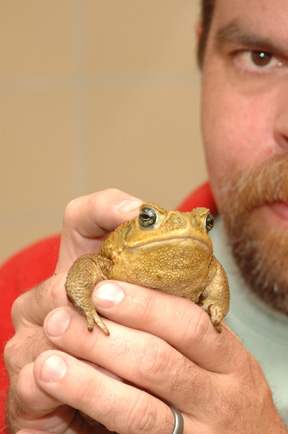 The speed of an amphibian’s tongue captured the imagination of Anderson, Ph.D., who has spent the last 10 years trying to figure out how a toad’s tongue can be so fast and accurate. For the last three years he has been working with two researchers from Northern Arizona University on a National Science Foundation grant that examines this phenomenon. Anderson specializes in neuroanatomy, the science of localizing function in the brain. He is collaborating with a muscle physiologist and a behaviorist to answer questions about the speed of a toad’s tongue.

“The action of a frog or toad’s tongue is much more complicated than we thought,” Anderson said. “I’ve been fascinated by how the brain coordinates movements in three dimensions, and this is not a trivial problem.”

There are several mysteries involved with this quest to understand the mechanics of a toad’s tongue, Anderson said.

“For one, muscles work by contraction, but a toad’s tongue shoots out to catch an insect. Muscles shorten to extend the tongue,” Anderson said. “When the tongue protracts it reaches accelerations up to 50 g-forces (about the same number of g-forces generated by a Sidewinder missile). And, when a toad opens its mouth to shoot the tongue, it can no longer see its target.”

Every striated muscle, skeletal muscles attached by tendons that are used to create movement, in a toad’s body is activated to propel and retract the tongue to its target. The muscle action is relatively simple and has been accurately described. There are protractor muscles to shoot out the tongue, and retractor muscles to retrieve it. The tip of the tongue is relatively light compared to the muscles that fire it, and it is shot out with great force.

“What we’ve figured out is that the tongue moving is not that complicated, but what happens before it is extended is the trick. The way the brain coordinates before the pre-load of the muscle is really important,” Anderson said. “We’re beginning to understand the underlying neuroanatomy, finding out what controls the movement. We’re beginning to look at the chemistry of how those neurotransmitters work, how the neurons talk to each other.”

That neuro activity is the specific neurons in the frog’s brain or brain stem, that trigger the tongue to shoot out.

Anderson likes to use the analogy of a sprinter in the starting blocks to explain the “pre-loading” of the tongue. A sprinter coils in the blocks and tenses muscles to prepare to push off. When the starting gun sounds, signals from the brain fire and sprinter explodes out of the blocks.

With a toad, every striated muscle pre-loads.

“The right trigger fuels the take off, for either the sprinter or the toad,” Anderson observes. “We’re not a 100 percent of what that trigger is in a toad, but we hypothesize it could be a muscle in the lower jaw, that when it contracts, it triggers the entire reaction.”

Anderson will continue to try to solve this mystery, with the help of his colleagues. Although this is basic research, is adds to the body of knowledge, which has numerous practical applications. Research he has been involved with has already been used in the creation of a “robo-frog” some years ago, and his research has been featured on the “Dialogue for Kids” program aired on public television.

“Ultimately, we’re trying to figure out how we coordinate movement and how to correct problems in movement,” Anderson said. “This has a lot of potential for a wide range of applications.”