“Reclamation, Reconstructions, and Other Grey Areas” by Benjamin Hunt is the next exhibit at the John B. Davis Gallery, located in the Fine Arts building at Idaho State University. The exhibition dates are Oct. 14-31. 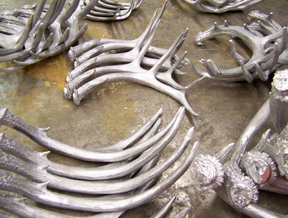 This event is partially sponsored by the U.S. Bank in cooperation with the Connie Smith Bowen Art Series at ISU. All events are free and open to the public. The John B. Davis gallery hours are Monday – Friday 10 a.m.-4 p.m.

Currently, Hunt is a visiting artist and lecturer at Idaho State University for the 2008-2009 academic year. Originally from San Diego, Calif., Hunt received his B.F.A. in spatial art from San Jose State University in 2000.

In 1992 Hunt started his education in painting. During Hunt’s studies his artistic interests grew to include sculpture with an emphasis in metal fabrication. In 1995 he met sculptor Holt Murray.

From 1997 to 2005, Hunt was lead studio assistant to David Middlebrook. Under Middlebrook, Hunt worked on numerous public, site-specific and private commissions from conception to completion. Simultaneously, from 2002 to 2005, Hunt also worked as lead assistant to San Francisco Bay Area Artist Randall Shiroma.

In 2005,Hunt returned to San Jose State University to complete a graduate degree in art. In 2008, he received his M.F.A. in Spatial Arts. Hunt is a recipient of the 2008 International Sculpture Center Outstanding Student Achievement in Contemporary Sculpture Award. More of his work can be seen at Grounds for Sculpture in Hamilton, New Jersey from October 6th to April 27th.