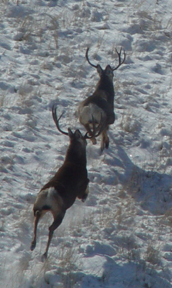 Idaho State University and the Idaho Department of Fish and Game are joining forces on a research project at the Tex Creek Wildlife Management Area east of Idaho Falls to try to better understand how deer and elk populations affect one another.

Mule deer and elk populations in the Tex Creek WMA are mirroring what is happening to the populations of these species on a larger scale in many areas of the Rocky Mountain Region: Mule deer numbers are declining dramatically, while elk numbers are increasing.

While plenty of studies have documented that mule deer tend to avoid high densities of elk, the ISU/IDFG study is unique because it is attempting to answer the “so what?” questions, such as does this avoidance by the mule deer affect their overall productivity or survival. The answers will help biologists understand how to better manage big-game herds. The ISU researchers are biological sciences research professor Dr. John G. Kie and his biological sciences master’s student Paul Atwood.

“I think the study is important because it looks at elk-deer competition here in eastern Idaho,” said Toby Boudreau, IDFG wildlife biologist and coordinator of the IDFG’s Mule Deer Initiative Program. “Over the past 15 years we’ve seen a marked increase in the number of elk and overall decrease in deer numbers at Tex Creek, and we don’t know exactly what the dynamics of that relationship is.”

This winter, ISU researchers and IDFG biologists and technicians will start rounding up mule deer and elk in the WMA. They will be putting radio/global positioning system collars on 20 female mule deer and 18 female elk. Putting collars on animals this size, particularly the elk, is not an easy task. The animals will be herded by helicopter and driven into nets, be captured in nets shot out from helicopters or darted with a sedative, and then radio-collared. Biologists are radio-collaring the big-game animals to help them collect data on the animals’ behaviors for the next two years.

Over the last 15 to 20 years, wintering mule deer wintering on the Tex Creek WMA have fallen by about 50 percent to about 1,500 animals, while elk numbers have about doubled to around 5,000 animals, according to Atwood.

The radio/GPS collars on the deer record 12 locations per day. The collars are programmed to drop off the deer in about one year, and biologists will collect the collars and download the data. Then another 20 mule deer will be collared and the process will be repeated. The ISU researchers will also begin conducting monthly aerial surveys and will track the animals’ movements.

Elk are larger animals and can wear larger, heavier collars. The GPS collars on the elk will record six locations a day, and the collars will drop off in two years.

The biologists will be using the data downloaded from the collars to plot areas of high use by mule deer and elk on the winter range. The ISU researchers also will be studying the juvenile survival rates of deer, and the physical condition of elk and deer. They will track the animals on their summer range, to study a number of other factors, such as to see if mule deer displaced by elk are more or less likely to raise single or twin fawns. 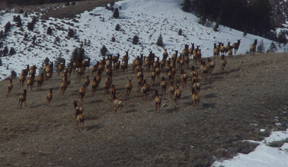 “There’s good evidence that mule deer will avoid big concentrations of elk, but we’re looking at what effects that displacement causes,” Kie said. “There is direct and indirect competition between deer and elk. Elk can physically displace deer, but the elk may also be modifying the habitat the deer are using. We’ll be looking at the survival rates of the displaced deer, and we hope to continue with studies of competition on summer range.”

Deer/elk interactions are complex, and so is the management of both species. With more information, biologists will have more options available for effective management. For example, an obvious way to reduce elk numbers is to increase the number of hunting tags, the length of hunting seasons and access to hunting areas. However, this can have detrimental side effects, such as a negative perception of hunting by a portion of the public. If, for example, biologists found elk were pushing deer out of wintering areas at lower elevations, extended hunting seasons for elk at lower elevations could be implemented. An action such as this could potentially push elk out of the lower elevations. This would allow deer access to winter feed, and perhaps have elk take refuge at higher elevations.

Dr. Kie currently is serving as an ISU research professor as part of a long-term personnel assignment from the U. S. Forest Service.  His research interests include land-scape ecology and the ecology and management of large mammals such as elk, deer and moose. He has a particular interest in modeling animal movements as a way to explore their effects on ecosystems. He has won a number of professional awards, including the prestigious Olof C. Wallmo Award from the Western Association of Fish and Wildlife Agencies in recognition of outstanding contributions to knowledge and improved management of mule and black-tailed deer.

Atwood has conducted mule deer, elk and moose research for the IDFG for the last three years, including a winter at Tex Creek.