Idaho State University’s Book Reading Project 2007, which is focusing on the book “Affluenza,” will offer various presentations Sept. 18 to 21 concluding with the showing of the “Affluenza” documentary followed by a keynote presentation and book-signing reception. 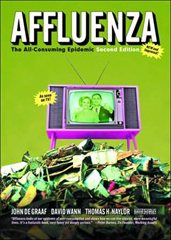 “’Affluenza’ will allow the University and local community to explore the high social and environmental costs of materialism and over consumption and examine valid solutions on how to treat this rapidly spreading epidemic,” said Bonnie Frantz, ISU Reading Project coordinator.

• Showing of the documentary “Affluenza “ at 8 p.m. in the Bengal Movie Theater, Pond Student Union Building.

• “Creating Television Documentaries” presentation at noon in the PSUB Salmon River Suite with author John de Graaf. De Graaf will talk about his career as a documentary filmmaker and how documentaries can be used to promote positive social change.

• “Writing Non-Fiction” discussion at 2 p.m. in the PSUB Salmon River Suite with author David Wann. Wann's will share his perspectives on how to write non-fiction articles and books. The workshop is designed for aspiring writers and anyone else who's interested.

• “Escape from Affluenza” documentary film at 5:30 p.m. in the PSUB Bengal Movie Theater. Authors will be available for a short question-and-answer session.

• “Neighborhoods on Purpose/Revitalizing Communities” workshop at 7 p.m. in Frazier Hall with Wann. He will present the importance of having strong neighborhoods. Wann will use slides and film clips to highlight the benefits of designing and re-designing neighborhoods for community rather than consumption.

• “Take Back Your Time” presentation at noon in the PSUB Salmon River Suites with author de Graaf, who will talk about time famine and overwork in America and its impact on our health, families, communities and environment. De Graaf will discuss what the Take Back Your Time campaign is doing to solve these problems, including a new campaign for a paid vacation law in the United States and how students are organizing on other campuses to gain better control of their time.

• Showing of the documentary film “Affluenza” with author Wann at noon in the Multipurpose Room of the Bennion Student Union Building at University Place in Idaho Falls.

• Presentation of segments of the documentary “The Motherhood Manifesto” with de Graaf at 1 p.m. in the PSUB Salmon River Suite. De Graaf will show segments from his new documentary and talk about new public policies to help make America more family friendly.

• Showing of the documentary “Affluenza” at 5:30 p.m. in the Bengal Movie Theater, Pond Student Union Building.

• “Affluenza the All-Consuming Epidemic” keynote discussion with authors de Graaf and Wann at 7 p.m. in the PSUB Ballroom.

• “Finding Real Wealth” presentation and slide show with author Wann at 11 a.m. in the PSUB Wood River Room. This presentation focuses on how Americans can reinvent their lifestyle to meet needs more directly, including what they eat, where they live, what they buy and where they work. By becoming less dependent on a "lifestyle support system," we can have twice the satisfaction for half the resources.

• “What’s the Economy for Anyway?” discussion with de Graaf at noon in the PSUB Wood River Room. Using humor and Powerpoint, de Graaf will talk about his latest national campaign and provide a historical comparison of American and European economic policies from 1972 until the present, in terms of their effect on quality of life, health social equity and long-term sustainability.

De Graaf has been producing documentaries, primarily for public television, for 25 years. As a filmmaker, de Graaf has received more than 100 regional, national and international awards. Wann is president of the Sustainable Futures Society, a board member of the Co-housing Association of the United States and the recipient of various lifetime achievement awards for his work on sustainability.

John de Graaf has been producing documentaries, primarily for public television, for 25 years. More than 15 of his programs have been broadcast nationally in primetime on PBS.  As a filmmaker, de Graaf is the recipient of more than 100 regional, national and international awards. He is the founder and president of the board of directors of the Hazel

Wolf Environmental Film Festival.  In addition to “Affluenza” and “Escape from Affluenza,” he also produced “Running Out of Time,” “For Earth’s Sake: The Life and Times of David Brower,” “Circle of Plenty,” “Green Plans” and “Genetic Time Bomb,” among many others.

David Wann is president of the Sustainable Futures Society, a board member of the Co-housing Association of the U.S., and the recipient of various lifetime achievement awards for his work on sustainability. He’s been a passionate gardener for 25 years and coordinates a neighborhood garden in the co-housing community in which he has lived for 11 years. He is editor of the book “Reinventing Community” and coauthor of “Superbia! 31 Ways to Create Sustainable Neighborhoods.” He produced “Building Livable Communities” for then vice president Al Gore’s office. He has also produced several other programs on communities and neighborhoods, including the award-winning TV programs “Placemakers” and “Designing a Great Neighborhood,” which appeared on Free Speech TV, Lime TV and PBS stations.

Professor emeritus of economics at Duke University, Thomas H. Naylor is a writer and a political activist and is the third author, but he won’t be appearing at ISU. For 30 years, he taught economics, management science, and computer science at Duke. As an international management consultant specializing in strategic management, Naylor has advised major corporations and governments in over thirty countries. He has concluded the American Empire, not unlike its former nemesis the USSR, has lost its moral authority and is no longer sustainable.