Dr. William Akersten, Idaho Museum of Natural History curator of vertebrate paleontology who is an expert on the prehistoric sabertoothed cat, will be featured on the television program “Prehistoric Predators: Saber Tooth” airing at 10 p.m. Aug. 19 on the National Geographic Channel. 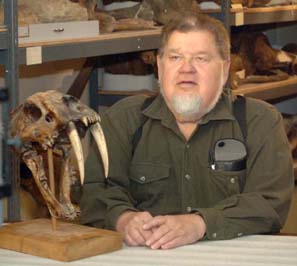 Last Halloween a television production firm, Creative Differences based in Los Angeles, came to the Idaho Museum of Natural History to film and interviewed Akersten about the sabertoothed cat for a session lasting about three hours.

Akersten was selected for the series because of his 15 years of experience at Rancho La Brea prior to coming to the IMNH. From 1972 to 1985, he worked for the Natural History Museum of Los Angeles County as coordinator of the Rancho La Brea Project, curator of Rancho La Brea, and curator of Pleistocene vertebrates. While there, Akersten worked closely on the sabertoothed cat fossil remains that were found in the tar pits, as well as the remains of other Pleistocene mammals collected there.

Akersten connected with the television production company through his contacts at La Brea. “Everybody who does anything with sabertoothed cats has to go through La Brea,” Akersten said. “One of my former assistants there talked with the production crew and suggested they contact me, so they did.”

“They are a strange creature,” Akersten said of the sabertoothed cat. “When you work with hundreds of them, you get interested.”

Akersten’s interest led him to publish a paper in 1985 showing that the sabertoothed cats could not stab with their canine teeth, but rather bit with them. “The structure of the muscles and bones of the jaw and cranium, along with the other teeth showed that stabbing was impossible,” Akersten explained.