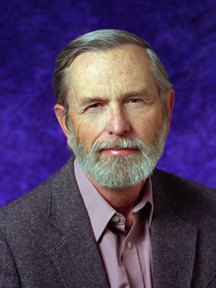 Idaho State University professor emeritus of biology Dr. G. Wayne Minshall has been elected a Fellow of the American Association for the Advancement of Science.

Minshall is “being honored for distinguished contributions to the field of stream ecology, particularly for stream ecosystem structure and function, and long-term effects of wildfires on stream ecosystems,” according to an AAAS press release. Minshall will be officially honored at the AAAS’s annual meeting in February during the AAAS Fellows Forum.

“It is pretty exciting to receive this award,” Minshall said. “It is not something I expected or thought would ever take place. It is a great honor: There are not that many in the state or the country that are given this kind of accolade.”

AAAS is an international non-profit organization dedicated to advancing science around the world by serving as an educator, leader, spokesperson and professional association. In addition to organizing membership activities, AAAS publishes the journal “Science,” as well as many scientific newsletters, books and reports, and spearheads programs to promote understanding of science worldwide.

“The election of Dr. G. Wayne Minshall as a Fellow of AAAS is a well-deserved honor that reflects his long-term contributions to the discipline of stream ecology,” said Dr. Terry Bowyer, chair of the ISU biological sciences department. “This important recognition of his accomplishments and distinguished career speak to the quality of his research and his dedication to science. He has my deepest respect and admiration.”

Being elected as an AAAS fellow is a rare honor for Idaho scholars. Two of ISU’s AAAS fellows are Dr. Robert Wharton, provost and vice president of academic affairs, and Bowyer. Minshall may be the only AAAS Fellow at ISU who completed the research for which he is being honored while an ISU faculty member. Both Wharton and Bowyer were honored for their work while they were at other universities.

“I was extremely privileged to nominate Dr. Minshall to the AAAS for consideration as a fellow,” Wharton said. “He is clearly one of Idaho’s most distinguished researchers and very deserving of this national recognition.”

Minshall retired from ISU in 2003 after a 37-year career. He authored more than 120 peer-reviewed journal articles and 130 technical reports. He is an internationally recognized expert on the ecology of flowing waters and the ecology of fire. His research emphasizes aquatic benthic invertebrates, community dynamics, and stream ecosystem structure and function. He is especially interested in the effects of disturbance on stream ecosystems, particularly long-term effects of wildfires.

The ISU professor is well known for his collaboration on stream ecology theory regarding the “The River Continuum Concept,” a subject about which he has co-authored and authored highly regarded scientific papers.

He has earned international recognition through his numerous publications on grant-supported projects with state and federal agencies and private industry, and by serving on numerous national and regional science work groups and advisory committees.

Some of his notable projects have been on the effects of disturbance on stream ecosystems, particularly long-term effects of wildfires in Yellowstone National Park and elsewhere. He has completed research on a number of Western streams, including some in the Frank Church River of No Return Wilderness in Idaho and the Fortymile River in Alaska. He has received several honors and awards, including ISU Distinguished Researcher, Outstanding Scientist of the Northwest from the Northwest Scientific Association, and Award of Excellence from the North American Benthological Society. Minshall has directed more than100 research grants and contracts from a variety of sources.  Over 50 young scientists have completed their graduate degrees under his direction.

Founded in 1848, AAAS serves some 262 affiliated societies and academies of science, serving 10 million individuals. “Science” has the largest paid circulation of any peer-reviewed general science journal in the world, with an estimated total readership of one million.