The Idaho Beta Chapter of Tau Beta Pi, the national engineering honor society in the ISU College of Engineering, has inducted eight new members this fall.

As a prerequisite to their initiation, student honorees performed several service projects. 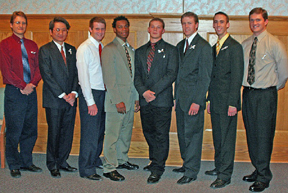 •  Taylor helped a young couple who had recently had a baby, and also volunteered at a second-hand store with incoming donations.

• Molitor participated in the “service Saturday project” by helping to unload, move, and reload a shed full of donated items at St. Vincent De Paul.

• White helped with the ISU LDS Institute Halloween Party, prepared a Halloween party for a fifth-grade classroom, and helped set up a football team dinner at Highland High School.

• Sedalor, helped with a book drive organized by the African Awareness Club where the money generated was sent to less fortunate kids around the world.

The student membership requirement includes a grade-point average in the top eighth of the junior class or top fifth of the senior class. According to the Tau Beta Pi eligibility code, “Distinguished scholarship, while the primary requisite for admission, must not be considered the sole criterion. After the scholastic requirements have been fulfilled, the selection shall be based on integrity, breadth of interest both inside and outside of engineering, adaptability, and unselfish activity.”