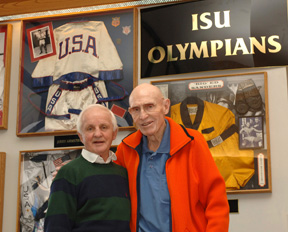 Armstrong, 70, is one of four Bengal boxers to represent ISC on U.S. Olympic teams. He competed at bantamweight, 119 pounds, at the 1960 Olympic Games in Rome.

His Olympic gear was recently assembled into a display that joins Olympic memorabilia from four other Bengals in the foyer of the Sports and Orthopaedic center at ISU, located adjacent to Holt Arena.

“Standing there before the likes of gold medalists Ed Sanders and Stacy Dragila, Dubby Holt and Amber Welty really put my achievements into perspective,” says Armstrong, who with his wife of 47 years, Kay, traveled from his home in Boise to view the display. “These people are at the pinnacle of sports at ISU and I am humbled to be in their presence.”

On Nov.3, he was one of nine individuals inducted into the Saginaw County Sports Hall of Fame, joining former University of Michigan and University of Arizona basketball coach Bill Frieder, former National Football League linebacker Monty Brown and others.

Armstrong traveled a circuitous path to Idaho State College. He was fighting in an all-service tournament when a referee asked him if he planned to attend college. Armstrong said that he didn’t know anyone who’d gone to college and hadn’t graduated from high school. <>The referee replied, “That’s all right. I know Dubby Holt.”

“It saved my life,” Armstrong says. “I didn’t know what I was going to do after I got out of the Army.”

After graduating from ISC, Armstrong went to work for the Idaho Department of Health and Welfare. He retired in 1998 after 29 years as personnel director.

He has stayed active in the sport he loves. He estimates he has refereed some 100 professional boxing matches, including the July 29 pay-per-view Roy Jones Jr.-Prince Badi Ajamu bout in Boise.