Art in a pandemic

I had just finished getting ready for my day in a lovely little town called Enterprise, Utah.  I had been touring with Missoula Children’s Theatre since January, moving from town to town, putting on hour-long musicals with kids K-12 in one week, in 20 hours of rehearsal give or take, as well as working as a teaching artist for schools on tour. My tour partner and I were incredibly excited for the day as the week had been going incredibly well, the kids were blossoming on the stage, and we were firing on all cylinders as both actors and educators. Within five minutes, we would learn our next few residencies had been cancelled. Nevertheless, we lifted each other’s spirits, packed up the truck, and the show went on that night, pushing through a dress rehearsal with a cast of 40 kids, then onto a performance in a theatre that felt empty, as we had to obey the social distancing guidelines the town put in place in place that day. We then packed up our set and costumes, said goodbye to the kids, drove to Las Vegas and flew home, leaving our belongings in Vegas, assuming we’d resume touring come April. Unfortunately, the tour was cancelled by Sunday morning.

Weeks went by, I felt lost. As a graduate of ISU’s 2019 class, I had barely started my career. The tour meant the world to me, and I genuinely loved my job. I didn’t know what to do with myself, and a million fears flooded my mind. Theatre companies everywhere started closing down, postponing seasons, and canceling auditions. My next gig, a musical theatre summer contract, was among those postponed seasons. It was about this time a former director of mine, Lenny Banovez reached out to me with a unique opportunity.

Lenny and I met during my junior year, in the ISU Department of Theatre/Dance, thanks to a grant Professor Vanessa Ballam applied for and received to bring in a guest director for an intense, two week rehearsal process of William Shakespeare’s The Taming of the Shrew.

As Artistic director of Titan Theatre Company, an Off Broadway classical theatre company based New York City, both he and the entire staff were faced with the challenge of continuing to perform theatre in an era where we can’t be in a theatre. The company had moved quickly and had already started an online educational program called, Shakespeare Online, but they sought to tackle this challenge of continuing to create new online content head on. Many companies had begun showing archival footage of past productions. But the idea of still rehearsing and creating something from nothing was Titan’s goal. Hence, the idea of Titan Shakespeare Festival was born. The goal: create a completely remote, online Shakespeare festival, utilizing professional actors from all around the nation that would present readings of three classical theater masterpieces, completely free and accessible to anyone around the entire globe. 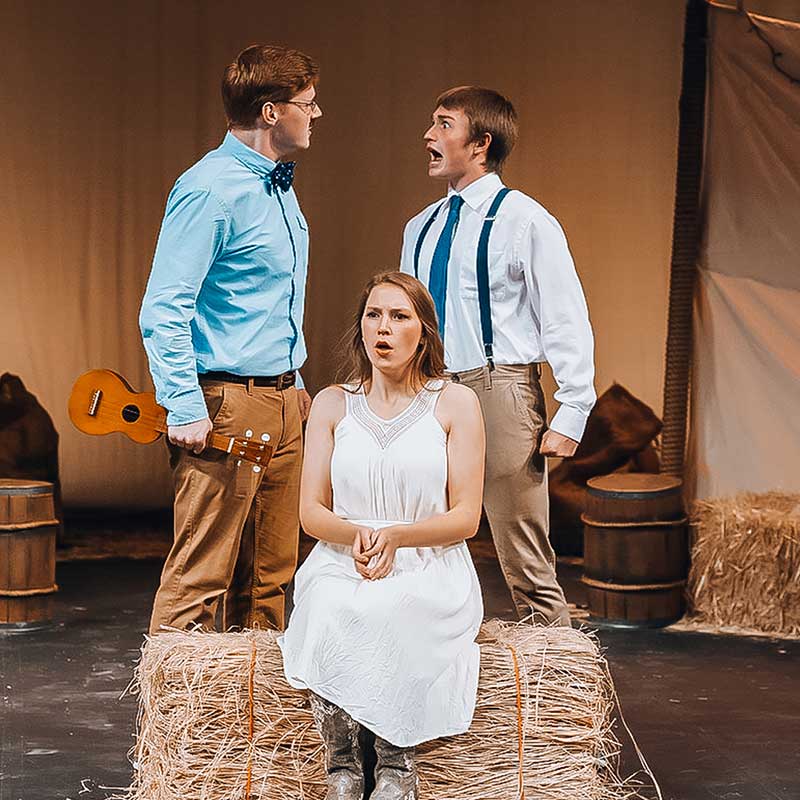 I was very humbled and touched to learn I’d been offered roles in two of the three productions, Puck in A Midsummer Night’s Dream and Boy in Henry V. Not entirely sure of what to expect, I graciously accepted and within a week we were in a fast and furious rehearsal/filming schedule.

Not long after the announcement of the festival, we learned that the new streaming service, Broadway on Demand, had picked up the “festival” and would be sponsoring and streaming the virtual productions opening nights and a variety of other company events. This entire group of actors signed on to this project for the love of the art, bringing every ounce of passion to the screen for the sake of the game and nothing else, but now there was an even greater opportunity to reach people around the globe. As an actor, my dream is to change the world, to use the theatre to touch people’s hearts and minds to help gradually shift the world toward a happier and healthier place. So on a personal note, this ignited a flame in me to truly give my all, with the hope of being able to positively impact people worldwide.

The process of creating a “studio” at home to work out of was the first hurdle. Part of this project was making sure we had access to a blank background, strong enough internet, proper lighting, proper camera angles, some way to get a script propped up at eye level, and representative costumes. In my case, that meant overhauling a corner of the woodshop with a table, a sheet, some plywood, a milk crate, a plastic bin, a comical amount of extension cords, two laptops, a phone, my trusty ring light, and black sheets on three six foot windows to block out natural light.

Meg Stover, the Business and Promotions Manager for the School of Performing Arts, came up with an innovative social media campaign to ensure that students and supporters could continue sharing their love of the arts from home. Music students sent excerpts from concertos, and theatre students sent clowning routines and renditions of songs from musicals using the #ShareYourHeART.

After accomplishing that, I joined a collection of tiny boxes on a screen to do what we do best, at a distance. Working over zoom presented a wide variety of obstacles. Everything from glitching, to passing motorcycles, to power outages made for quite the challenge. Sometimes we would be midway through an incredible take only to hear an ambulance blare by, leading to what would become a very familiar phrase “Let’s go again.” I personally have absolutely no film training at all, acting for the camera was and is a very new concept to me. Paired with the challenges of acting in an empty room without a scene partner there with you, this process has pushed me in all kinds of new and unique ways. Four hours a night, actors from around the nation would pop into zoom and give it their all, doing all sorts of crazy things to tell the story. Then the director, Lenny, would continue working into the night and up until rehearsal the next day editing the footage, combing through the script for unique shots, and working with other Titan and Broadway on Demand staff members to bring this immense and beautiful project to life.

This has been an incredible journey. Diving headfirst into unexplored artistic territory had me nervous, but Titan hires the best. Not just high caliber actors but high quality people as well. The entire group has been patient, loving, understanding, and supportive of one another no matter what obstacles appeared. Thousands of miles from many of these people, most of which I’ve never met in person, I still felt/feel the familiar safety of the theatre. Every day I am more and more in awe of the people I am lucky enough to be working with. I can’t wait to work with all these artists in person someday. We’ve made something truly special here that I believe will have a positive impact. We run through Mid-June, and I promise, you don’t want to miss this.

The Importance of Being Earnest and A Midsummer Night’s Dream are open and available to stream for free. Visit Titan Theatre Company for information on dates, how to reserve your free E-tickets, where to view, and how you can help support/donate to Titan.