There is a lab on the Idaho State University campus, supplied with eggs by a 20-pair aviary of Zebra Finches, where undergraduate and graduate students can measure minuscule biorhythmic nerve signals that can be translated into sounds that humans can hear.

“We basically have a stereo speaker hooked up to tiny electrodes, and when we grab a nerve that connects to breathing muscles, we can hear what basically sounds like low-frequency far-away thunder, ‘CRRRRRRR, space, CRRRRRRR,’” said Jason Pilarski, ISU professor who runs the lab, known affectionately by its members as Team Bird Brain. “We actually listen to audio from brainstem circuits that is a proxy for the motor rhythms that underlie breathing behaviors in life. It is quite cool and is what gets curious students into the lab.”

Team Bird Brain studies breathing control and how respiratory gases are sensed and converted into motor output for muscles involved in the breathing process or ventilation. More specifically, the lab studies the development of these motor rhythms and how they are controlled by the brainstem.

This basic research has a wide variety of applications for understanding what affects breathing, including to potentially help understand systemic aspects of the new coronavirus. For example, one interesting phenomenon in covid-19 cases is the lack of hyperventilation or even gasping in people arriving at the ER, despite very low blood oxygen measurements. This response would normally be controlled, in part, within the brainstem. Our research can also help with understanding other pulmonary diseases, such as sleep apnea, and many medical or physical conditions that affect breathing control, from running at high altitudes to genetic diseases that affect the brainstem.

“We use an (avian) model system that had never been used before (to study this topic),” Pilarksi said. “I got lucky and used a comparative point of view, meaning I study a non-human animal that can highlight some component of physiology and development (in humans), which in this case are the details of breathing regulation. We are probably the only lab in the world that is using bird incubation to study the development of breathing at the level of the very microcircuits that produce this behavior.”

This novel approach has attracted more than $700,000 in funding from the National Institutes of Health, which initially funded Team Bird Brain six years ago and will now fund his lab for three more years with the option for a fourth.

“The long-term goal of my research team is to understand how brainstem motor circuits that control life-sustaining autonomous breathing patterns develop, mature and maintain rhythmic activity in the context of health and disease,” Pilarski said.

The lab is studying avian development because birds allow unique access to the embryo at any time during development. Birds are a great translational model because they breathe and have high metabolic rates similar to humans, but there are interesting differences, too.

“This (approach) might allow us to elucidate unique (cellular) mechanisms that enable you to breath unconsciously,” Pilarski said. “We don’t think about breathing. We just do that, unless you want to, you can control your breathing, much like I do when I am speaking with you.  But it is also something that occurs automatically.”

Studying the bird embryo brainstems could help the researchers figure out how the nervous system develops connectivity between motor neurons and then how it responds to physiological stresses, especially during that incubation period of the egg.  When those circuits are forming, it is a critical stage of breathing development when things can go wrong.

“I think that especially working with the Zebra Finch, it gives us a window into early development that is really hard to study in mammals and it tells us a lot about how our own breathing develops, too,” said Jessica Whitaker, a Biological Sciences doctoral student who has worked in the lab the last four years.

She said the breathing rhythms they are studying in the lab are the same types of early rhythms that are happening in a human baby in utero.

“Whenever a mother is expecting and she feels the little kick of a baby in the womb,  those little kicks are being produced by similar early motor rhythms that we are studying in our lab,” Whitaker said. “So just being able to better understand how rhythmic neural activity is produced and how it is controlled and how it contributes to normal behaviors like breathing, will hopefully help us to be able to ensure that babies can produce these rhythmic breathing behaviors when they are born. “ 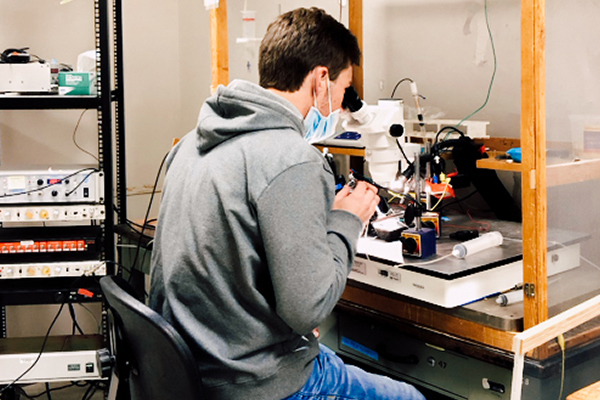 Both humans and birds go from breathing in an aquatic environment, inside the womb or egg, to breathing in an aerial environment, using their lungs, very quickly. Human and bird breathing control systems have to be functional or life-threatening troubles occur. A bird’s development is convenient for studying this transition because inside of the egg there is an air cell created at one end so the chick begins breathing air inside the egg before they are fully hatched into the outside “aerial” world where the lungs must mediate the exchange of respiratory gases. In short, birth is slowed down compared to humans.

“Because they start to breath prior to hatching into the external environment it is good for us because it slows down birth over a couple of days so we can study it (the transition) during that time,” Pilarski said. “I think we have a cool model and I think that is why we’ve been successful  with the NIH. It is a different model in that it allows us to look at both the aqueous phase of the development of the brainstem and the nervous system, and then how control features change once the bird starts breathing air, similar to how things would have to change for us to start breathing air.” 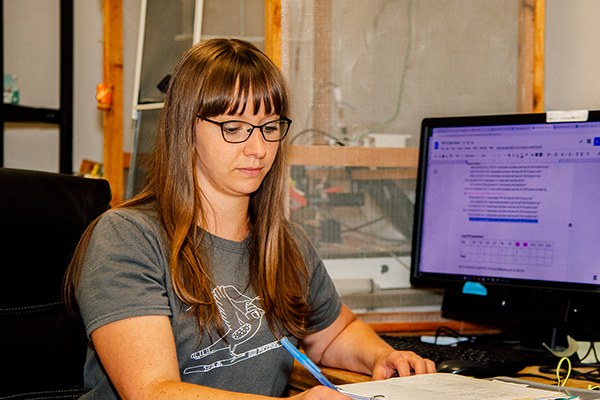