It had been two years since John Njeri last saw his mother. This time, if he could make it, would be his last chance.

Njeri’s mother, who lived in Kenya, had passed away, and he wanted to return home from Idaho State University for the funeral, but he didn’t have the money for the last-minute plane ticket.

“I hadn’t seen her in a very long time,” he said. “I wanted to be able to see her for one last goodbye.”

On the advice of fellow students, Njeri visited the Office of Student Affairs, where he met Kris Clarkson and learned about the Student Emergency Fund.

Njeri didn’t have much time — the journey home took two days, and Njeri had less than a week until the funeral. Through the Student Emergency Fund, Clarkson was able to offer Njeri $1,400 for the plane ticket, and, when the bank said they needed to hold the funds for two days, wrote a letter to the bank explaining the circumstances.

Njeri booked his flight on Monday evening and left at 4 a.m. Tuesday, just in time to make the funeral on Friday. 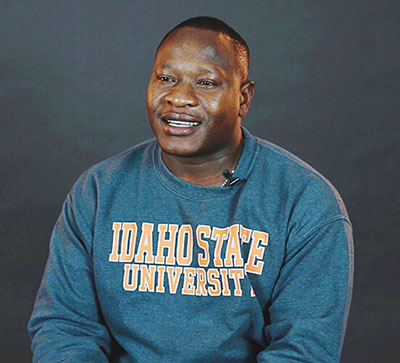 “Otherwise, I wouldn’t have been there,” he said. “I didn’t miss anything. I was able to see her again, for one last goodbye.”

When he returned to campus, Clarkson counseled Njeri on what hardship paperwork could be filed because of his missed classes, and helped make sure he had access to any needed services.

“I didn’t have any idea of these things,” he said. “They helped me out.”

The Student Emergency Fund began two years ago with $10,000 in one-time funding. The idea behind the program, Clarkson says, is to help students with unexpected, short-term needs. The fund has helped students with car repairs and unexpected health expenses. It has also helped crime victims.

Along with providing monetary help when needed, Clarkson also offers students community options for assistance. There also are ISU resources available, such as Benny’s Pantry, which provides food assistance for students and their families.

“We talk about people pulling themselves up by their bootstraps, but first you have to have the boots.”

For students who have trouble with rent or utility bills, the Office of Student Affairs provides financial counseling to help them become self-sustaining.

“The whole idea is that these are unanticipated costs,” Clarkson said. “We talk about people pulling themselves up by their bootstraps, but first you have to have the boots.”

Often, Clarkson says, a little bit of help can mean the difference between staying in school and leaving, and those decisions can have a lifetime effect.

For Jonathan Martinez, a little bit of help was all he needed to go from struggling to back on his feet. Martinez, a freshman at ISU and an Army combat veteran, needed help with one month’s rent when his wife was out of work. The Student Emergency Fund was able to help, and now his family is back on track and Martinez can focus on school.

When he graduates, Martinez says he and his family plan to repay the fund, and help others as he was helped.

“It’s something we’ve talked about,” he said. “If it can help another family, we definitely will do whatever it takes. It’s not just the fund that’s there – it’s the people. It’s so nice to have that help there.”

The Student Emergency Fund accepts gifts to help students stay on the road to success. To give to the fund, visit isu.edu/give.