On March 10, Idaho State University students and alumni will showcase their talents in two performances on Broadway in New York City in the Mountain West Actor Showcase. 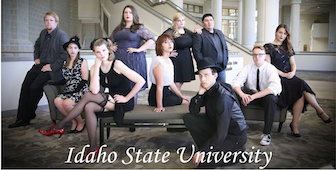 Ten students, including one graduate student and two alumni, will perform monologues and scenes prepared in Vanessa Ballam’s Advanced Acting class. Each performance will be held at the Acorn Theatre, located on Theatre Row on 42nd Street and Broadway. Utah State University invited ISU to join them in the showcase, and will also perform in the Acorn Theatre.

“My students will get the unique experience to perform directly on Broadway,” Ballam said. “This opportunity will help them take the next step in their careers, and connect them to potential employers.”

This is the first showcase that students at ISU have travelled to New York for. Ballam said that this is a big deal for students because Bachelor of Arts programs don’t usually offer showcases.

“I wish something like this was done for me as an undergraduate student,” Ballam said.

During their time in New York, students will meet with Sheldon Harnick, author of the play “Fiddler on the Roof” and last living composer of the Golden Age of Broadway. They will also get to visit Hal Prince’s office and meet with his assistant Eric Price. Prince is a theatrical producer and director associated with many Broadway plays including “Sweeny Todd,” “The Phantom of the Opera” and “Fiddler on the Roof.”

“This opportunity is absolutely incredible for me as a student,” said Daniel Shelden, senior theatre student. “Not only do I get to perform on Broadway, which is something most actors can’t say, but I get to explore a possible place of employment in an incredibly safe and educational environment.”

Many details went into preparing for the showcase. Students sent out 550 invitations to talent scouts and companies in New York. They created professional websites and had professional headshots done. They also performed a version of the showcase at the College of Arts and Letters New Year’s Eve Gala.

The students held several fundraisers throughout the year to help with trip expenses. In October, theatre students put on the Idaho State Horror Story haunted house in the basement of Frazier Hall. They also held a “never-ending bake sale” in the Stephens Performing Arts Center for students who were taking classes and rehearsing in the building.

In addition to fundraisers, students wrote grant proposals for help with travel expenses. Each student who submitted a grant proposal, received money for travel.

To donate to this and future showcases, or learn more information, contact Vanessa Ballam at ballvane@isu.edu or 282-3173, or email the showcase students at showcase.isu@gmail.com.