Idaho State University’s Dr. Shawn Bearden has been awarded a grant from the National Aeronautics and Space Administration (NASA) to fly mice on the International Space Station in 2015 and 2016 to study how to protect astronauts from visual and possible cognitive impairment during long-term space missions.

“This problem is at the top of NASA’s priority list of physiological and health concerns for space exploration,” said Bearden, director of the ISU Biomedical Research Institute and an associate professor of biological sciences. 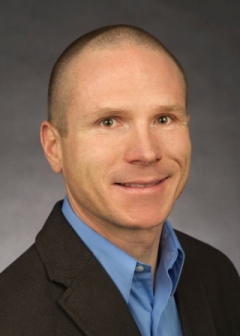 NASA has been concerned for many years that some astronauts are developing visual impairments.

“With the International Space Station, astronauts are staying in space for longer periods of time, and visual impairment is becoming a significant problem,” said Howard Grimes, ISU Vice President for Research and Economic Development.

“I am excited and honored that we’ve been chosen to perform these studies because of the relevant and immediate need for understanding what is going on to a distinct group of people who are suffering acutely,” Bearden said. “I am hopeful that we can find the reasons why and contribute to the solution.”

He explained that the visual impairment suffered by some astronauts may be a result of the increased pressure on the eye that occurs in the weightless “microgravity” environment in space. On earth, gravity pulls our body fluids and blood toward the ground, away from our heads. In a microgravity environment, however, fluid and blood distribution shifts, increasing in the head. This is why astronauts faces look so puffy while in space. 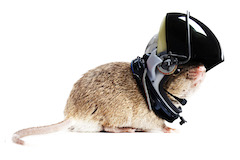 “While pressure shifts are the focus of our hypothesis, astronauts are also exposed to other environmental stresses not found on earth, such as higher levels of both radiation and carbon dioxide” Bearden explained, “and we are also conducting ground-based studies to evaluate some of these effects alone.” One or a combination of these stresses produces what is called visual impairment and intracranial pressure syndrome.

“The head is not used to those pressures and, in some ways, it is much like the sensation of hanging upside down, but for the astronauts it occurs for 24 hours a day,” Bearden said.

Bearden’s ISU lab was invited to participate in the project because of its expertise and track record in understanding the leakage of tiny blood vessels, the capillaries, in the central nervous system, which includes the brain, spinal cord, and retinas of the eye.

“There are tight barriers in the capillaries so the blood does not leak in these organs like it does elsewhere in the body. But, we think these vessels can’t sustain the pressure and are beginning to leak or change how they regulate fluid transport,” Bearden said.

ISU will take part in two flights of mice on the International Space Station. With the expert assistance of the astronauts, ISU researchers will study the structural and molecular changes that have taken place and determine the extent of adaptation and damage.

“With these two flights, we hope to also find clues about what happens when astronauts return to a gravitational environment,” Bearden said. “If we’re thinking about long-term space flight to distant planets, there is a significant concern both for time of exposure in flight and for subsequent reentry. We don’t know what may happen when compromised barriers go back to a gravitational environment.”

Bearden’s lab will be studying blood vessels in the eyes and brain because changes in the vessels in the back of the eye can match changes occurring in the deep vessels of the brain.

“We’re concerned that, if we’re getting visual changes on the International Space Station, longer space-exploration flights in the future may lead to cognitive changes as well,” he said.