Michael J. Byrne to receive Honorary Doctor of Letters from Idaho State University at May 5 commencement

Idaho State University will award an honorary Doctor of Letters to Michael J. Byrne, past president of the ISU Foundation Board of Directors and current chair of the Board, at ISU Commencement May 5. 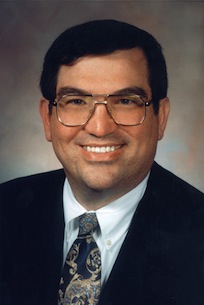 He is retired as a senior partner at PricewaterhouseCoopers, where he was a lead accountant over multinational corporations such as Nike, Inc., Chevron, Phelps Dodge, Avery Dennison, Edison International and many others. While serving PricewaterhouseCoopers he worked in locations such as Portland, Ore., Phoenix, Los Angeles, Orange County, Calif., San Diego and Salt Lake City. He currently resides in Rigby and Puerto Penasco, Mexico.

Byrne stays active in professional organizations and enjoys sports, opera, service to the Catholic Church, and volunteer efforts for ISU. Faculty, staff and students at ISU have appreciated Byrne's continuing interest in his alma mater. He has generously funded scholarships at ISU and makes significant gifts to the L. E. and Thelma E. Stephens Performing Arts Center.

He received the 1990 College of Business Professional Achievement Award and was honored with the first President's Medallion in 2001. In 2007 he received the Distinguished Alumnus Award.

"Idaho State University and Southeast Idaho will always be my home, no matter where in the world I live," he says.