May 9, 2011
ISU Marketing and Communications

Idaho State University Professor Richard Hansen's research on the Maya civilization in Guatemala's Mirador Basin is featured as the cover story of the May issue of Smithsonian magazine.

This is one of several recent or upcoming prominent events focusing on Hansen's research.

"High-profile stories like the one in the May Smithsonian Magazine help raise awareness to protect and preserve the Mirador Basin, and continue the research and conservation efforts," said Hansen, who is the director of the Mirador Basin Project and president of the Foundation for Anthropological Research and Environmental Studies (FARES). "I am much appreciative of the Smithsonian's efforts as well as the tremendous support of our partners and sponsors because this area is a treasure almost beyond description, and is worth saving." 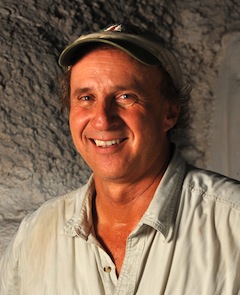 The title of the Smithsonian story is "El Mirador, the Lost City of the Maya," a detailed account, complete with numerous pictures, of the Mirador Basin. To view the story, visit the following link:

The Mirador Basin story in Smithsonian is one of several major events recognizing Hansen and his research. The Morgan Library and Museum in New York City is hosting an event, sponsored by FARES and Smithsonian, on the Mirador Basin on May 25.

Hansen and the Mirador Basin will also be featured on a National Geographic Channel special scheduled to air in September, and in an Archaeology Magazine article scheduled to print this summer.  In addition to the FARES Foundation, the work is sponsored by the Global Heritage Fund, the Foundation for Maya Cultural and Natural Heritage (PACUNAM), the Hitz Foundation, Friends of the Natural and Cultural Patrimony of Guatemala (APANAC), and many other private institutions and prominent individuals in the U.S. Europe, and Guatemala.   The Guatemalan Ministry of Culture and Sports and the Institute of Anthropology and History are also important components of the project.

"We are extremely proud of Dr. Richard Hansen and the Mirador team and their dedication over the past three decades to save this priceless 'Cradle of Maya Civilization,'" said Global Heritage Fund executive director, Jeff Morgan from Palo Alto, Calif. "We commend Idaho State University for their critical academic and financial support of this global conservation and scientific research program."

"The uniqueness of this world heritage marvel has motivated us to support Dr. Hansen´s research and his archaeological work," said Fernando Paiz, a prominent Guatemalan businessman and president of PACUNAM (Foundation for Cultural and Natural Maya Patrimony).

The foundation, which consists of many of the most prominent businesses in Guatemala, has been instrumental in the implementation of the project.

"We are committed to support the Mirador Basin Project. We are proud as Guatemalans of this unparalleled and rich cultural legacy," Paiz said.

Hansen is an organizer and a participant at a major Maya exhibit in Paris in the Musee du Quai Branly starting June 20 titled "The Maya: From Dawn to Dusk in Guatemala." He will be a keynote speaker at a world symposium on the Maya in Paris on July 2 that is being held in conjunction with the exhibition.

Hansen has been a popular speaker in many scientific and public conferences, including the World Forum on Cultural Heritage at the World Expo in Shanghai, China in 2010. This year he has been the keynote speaker at scientific conferences at Tulane University in New Orleans, the 3rd World Congress of Maya Culture in Merida, Mexico, and will also be speaking on Oct. 7 in Minneapolis and at the Chacmool International Maya Conference in Calgary, Canada, on Nov. 12.

"My plate is a bit full, especially considering that I am trying to finish my book on the Mirador Basin and get it out this year," Hansen said.

Among the Mirador Basin's most spectacular attributes, according to Hansen, are that it features some of the largest conglomerations of ancient cities in the New World; it has the largest pyramids in the world in volume; it features the world's first freeway system; it may have been the first political and economic state level society in the Americas.  It has the largest known concentration of jaguars left in the world and Hansen's team discovered nine new species of moths in 2010.  The area is also the largest remaining tract of unpopulated jungle in Central America, hosting a wide range of rare animal and plant species.

The Department of Anthropology at ISU is conducting important research in a variety of places throughout the world, and Hansen's research in Mesoamerica is one of the primary areas of focus for the department. Important laboratory research is now being conducted in the CAMAS laboratory on campus, and ISU students are involved in field schools and technical training in scientific analyses.  The department also has a world-renowned Maya hieroglyphic writing expert, Stanley Guenter, teaching classes on campus for the first time this spring semester.  Guenter works with Hansen's Mirador Basin Project.

The Foundation for Anthropological Research and Environmental Studies, based in Idaho, is a non-profit organization dedicated to conducting scientific research on ancient and contemporary societies and their related environments. The organization is committed to utilizing cultural and ecological data for the conservation and development of threatened areas, and to promote education in local communities. FARES is currently working in close collaboration with the government of Guatemala, and with numerous foundations and institutions throughout the world.

For more information on FARES and the Mirador Basin project visit http://www.fares-foundation.org/ and http://www.miradorbasin.com.