Olson, a noted scholar of rhetoric and cultural studies and an experienced academic leader, was selected for his post in January, following an extensive national search. 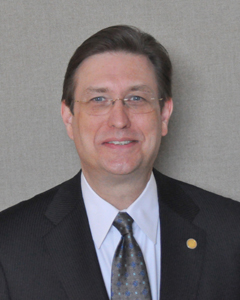 “ISU is a quality institution with a rich history,” said Provost Olson.  “I am delighted to be a part of its dynamic leadership team.”

Olson has served as a faculty member and administrator for nearly three decades, mostly at large research universities. In 2002 he had the unique opportunity with his colleague Ralph Wilcox to transform the University of South Florida’s St. Petersburg campus from a traditional branch campus to a fully functioning, semi-autonomous institution. For two years he served as the campus’ chief academic officer, creating the institution’s core colleges, hiring its founding deans and vice presidents, and preparing the institution for separate accreditation.

He then served as Dean of the College of Arts and Sciences at Illinois State University for five years. At both institutions, he worked to build strong curricular and research programs in the sciences. Toward that end, he oversaw the creation of USF-SP’s first science research laboratory facility and ISU’s Programs of Excellence, six interdisciplinary science programs.

A prolific writer, he has published nearly two dozen books and 100 scholarly articles, book chapters and interviews. His most recent book, “The Future of Higher Education: Thoughts from America’s Academic Leaders” (coedited with John Presley) will be released this summer. Olson also pens a popular monthly column on academic administration for the Chronicle of Higher Education, the nation’s premier weekly publication covering events and issues in postsecondary education.

A celebrated teacher and scholar, Olson has won several awards for outstanding research and for teaching on both the graduate and undergraduate levels. He has served as a director or committee member of nearly 40 doctoral dissertations and 20 master’s theses, and many of his students have gone on to become national leaders in the discipline.

Each year the Association of Teachers of Advanced Composition presents a national award in his honor for the most outstanding scholarly book on rhetorical and cultural theory, “The Gary A. Olson Award.”