Idaho State University graduating senior Autumn Gomez has earned a Fulbright award to work as an English Teaching Assistant in Andorra, a small country located between Spain and France.

A double-major in international studies and Spanish, the 29-year-old will begin her Fulbright duties in September. 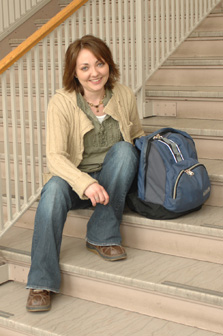 “It’s almost too good to be true,” Gomez said. “But one thing is important to mention: this Fulbright is not only an honor for me but also for my professors and ISU.”

Andorra is a 174-square-mile country (about two-and-one-half times the size of Washington, D.C.) nestled in the Pyrénées Mountains. It was a “coprincipality” of France and Spain from 1278 to 1993, when it was internationally recognized as a sovereign state. It retains some governmental ties with both France and Spain, however.

She picked Andorra because it was in an interesting part of Europe and “I know Spanish, I’m learning French and I want to learn Catalan,” Gomez said.

She will be teaching English in secondary schools of the Andorran educational system from Sept. 1 to June 30, 2009. The Fulbright allows her 21 days to travel outside of her host country, and she will be paid about $1,000 Euros a month, plus travel expenses.

Gomez overcame obstacles both mundane and profound to earn her Fulbright. On the mundane side, she estimates it took about 90 hours of her time to apply for the Fulbright assistantship. On the profound side, she credits her late husband, Carlos, with inspiring her to achieve things like this assistantship. After graduating from Pocatello High School in 1997 Gomez briefly attended ISU and then served a two-year mission for the Church of Jesus Christ of Latter-day Saints in Argentina. She returned to ISU as a newlywed in spring 2005 with the support of her husband who was working to put her through school, when her husband was killed in a car accident during spring break.

“It was devastating to lose my husband,” Gomez said, “but overcoming that tragedy is the motivation that has brought me to where I am today.”

Gomez was assisted in her efforts at receiving a Fulbright by Sharon Sieber,  Ph.D.,  ISU professor of Spanish and ISU Campus Fulbright Program Advisor. Sieber received a faculty Fulbright combined lecturer and and research award to Colombia in 1999 representing ISU at La Universidad Javeriana in Bogotá and the Universidad del Cauca in Popoyán.

“When Autumn received the Fulbright I was as excited as if I’d received it myself,” Sieber said. “It was almost hard to comprehend that after we worked so hard on it that we finally got it.”

As a Fulbrighter, Gomez will join the ranks of distinguished alumni of the program.  Fulbright alumni have become heads of state, judges, ambassadors, cabinet ministers, CEOs, university presidents, journalists, artists, professors and teachers.  They have been awarded thirty-seven Nobel Prizes.  Since its inception more than 60 years ago, approximately 300,000 Fulbrighters have participated in the program.  The FSB is a presidentially appointed twelve-member Board that is responsible for establishing worldwide policies for the Program and for selection of Fulbright recipients.

The program, named for the late Sen. J. William Fulbright of Arkansas, is the U.S. government’s flagship program in international educational exchange.

ISU students can apply for a Fulbright fellowship through the Fulbright Program Adviser if they are graduating seniors or have recently graduated from ISU.  For more information in general on the Fulbright program, visit http://fulbright.state.gov/ or http://us.fulbrightonline.org/home.html.

For more information for applying for a Fulbright at ISU, contact Sieber at (208) 282-2883 or siebshar@isu.edu.