His collaborative research community numbers more than 40 researchers in 16 countries on five continents, and it will soon extend itself into South America. Owens' participation is funded in large part by a U.S. National Science Foundation (NSF) grant of $394,000 for three years. He will also receive generous travel subsidies from ESF throughout this period. 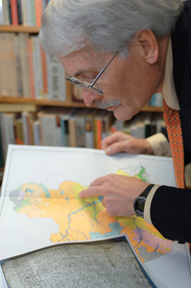 Owens’ project involves researchers in anthropology, computer science, economics, geography, geosciences, geotechnologies, history, religious studies, sociology and mathematics. It contributes to a program “The Evolution of Cooperation and Trading” (TECT), which is funded by the ESF's EUROCORES (European Collaborative Research) Scheme, based in Strasbourg, France.

Peer reviewers and the international TECT review panel lauded the project as “internationally leading,” “path breaking,” and “methodologically, very innovative.” The panel stated that it “reacts enthusiastically to the bold ideas underlying the proposal.”

Owens was honored with a seat on the TECT Scientific Committee, which will direct the entire TECT program. On the committee, he will work closely with a diverse group of distinguished natural and social scientists based at major universities in France, Hungary, India and Spain, as well as at Harvard and Princeton Universities.

Owens’ research group will examine the evolution of cooperation among merchants and between merchants and other groups, with particular attention to the commercial networks of importance to the global domains of Iberian monarchies during the first global age, 1400-1800. Although such cooperation-based networks formed the foundation of globalization for centuries, they were marginalized in the 19th century by more competitive interactions, Owens said. He will attempt to explain how one complex system was transformed into something quite different around 1800.

Because so much emphasis was placed on competition in the early development of both economic and evolutionary theory in the 1800s, researchers who employ these theories – which extended themselves into many academic disciplines and imaginative literature – have trouble dealing with the widespread presence of cooperative interactions within and among species and in human societies, Owens said.

“Somehow during the first global age, without being coerced to do so, merchants and others came together and cooperated to establish extensive networks through which they moved products and information over great distances,” Owens said. “In this sense, these were self-organizing networks because they were formed and maintained by the interactions of the participants themselves, creating a global economic environment well beyond the capacity of any governmental or other hierarchy of that time to establish or control. Through research on cooperation in the midst of globalization, perhaps we will discover clues about how to shape a better world.”

A group of European evolutionary biologists and economists convinced ESF to adopt the TECT program as a vehicle to address continuing research problems through the creation of broadly multi-disciplinary projects, which include researchers drawn from a wide-range of humanities, social science and natural science disciplines.

Owens and the other researchers will use Geographic Information Systems (GIS) to integrate a large body of historical information about social networks spread over a huge geographic space during centuries and analyze the system’s dynamics. GIS is a system of hardware and software used for storage, retrieval, mapping and analysis of geographic data. GIS can be used for scientific investigations, resource management and development planning. For these purposes, Owens’ new project will create an innovative temporal GIS, which requires that historians collaborate closely with computer scientists, geotechnologists and mathematicians.

In creating his project, Owens followed the collaborative model on which ISU’s new Master of Arts degree in historical resources management is founded. As the first history degree program of its kind in the world, ISU’s master’s course of study focuses on the use of GIS in geographically-integrated historical research. Students will learn to build collaborative relationships to undertake the technically demanding research needed to provide answers to significant human problems.

“When I read the TECT announcement,” Owens said,  “I saw the program as my way to go beyond my own research on economic and political cooperation in the Kingdom of Castile to model for my students and discipline the multi-disciplinary research that is both possible and necessary in the 21st century.”

Owens’ immediate goals are to involve undergraduates into the project and to get funding for several other GIS-related research proposals the department has in the pipeline.