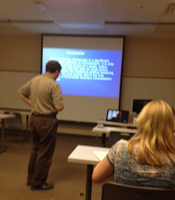 Political Science is a diverse area of study and provides a wide range of job opportunities, including government jobs, political positions, and corporate level jobs. Some of the fields that graduate students can pursue include comparative politics, international relations, political philosophy, public administration, and public law.

The job market in the area of political science is growing and job opportunities are prevalent. This page will provide students with a collection of links to help them understand political science and the organizations that are important to the field of study.