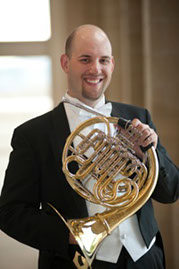 Michael Helman joined the faculty of Idaho State University in 2008 and is an instructor of music and horn for the department of music.  He also serves as the director of bands at Franklin Middle School (2014) and School District 25’s middle school music coordinator (2019). His teaching responsibilities within the School of Performing Arts include applied horn while also coaching student brass ensembles. He is an active clinician, adjudicator and performer throughout Idaho and works with all levels of musicians. He currently performs as Principal Horn with the Idaho State Civic Symphony, Portneuf Brass Quintet, City Creek Winds, and serves as the personnel manager for the symphony.  He has been featured as a guest soloist multiple times with the ISU Wind Ensemble, has been featured as a guest artist with area local groups, and has performed with the Boise Philharmonic and Idaho Falls Symphony Orchestra.

Prior to taking on the FMS band program, he was the business manager for the School of Performing Arts at ISU.  Other previous teaching and performing includes being the Director of Bands and Music Education for Oaklawn Academy in Edgerton, Wisconsin. He held this position for three years while maintaining a private studio and performing with the Oshkosh Symphony Orchestra and Four Seasons Theater.

Michael attended the University of Iowa from 2002-2004, where he earned a Master of Arts degree in horn performance. During his time in Iowa City, he studied with Jeff Agrell and worked as the teaching assistant to the horn studio. In addition to performing extensively with both the orchestra and band programs, he was active within the Center for New Music and Evan Mazunick’s “soundpainting” ensemble throughout his tenure. Other Iowa chamber ensembles include the Old Capitol Brass Quintet, UI Graduate Woodwind Quintet, Iowa Brass Choir and the Iowa Horn Trio. He holds the Bachelor of Music in Music Education degree from Columbus State University (Columbus, GA), where he studied horn with Dr. Kristen Hansen.

His favorite chamber musician to collaborate with is his wife, Shandra, with whom he is raising two boys and two cats.