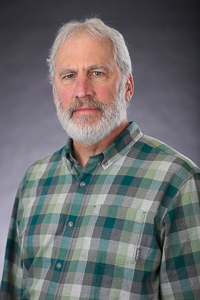 Patrick Brooks is in his twenty-first year as Director of Bands and Professor of Music at Idaho State University. In this capacity he conducts the Symphonic Band, Wind Ensemble, Jazz Band I and guides all other aspects of the ISU Band Program. Dr. Brooks also teaches conducting, trombone, and coaches various small ensembles. Active as a trombonist, for eighteen years he performed as a member of the Sun Valley Summer Symphony where he played alongside members of many of the nation’s major symphony orchestras. He has also performed with the Grand Teton Music Festival Orchestra, the Wichita Symphony Orchestra, the Portneuf Brass, and is principal trombone in the Idaho State Civic Symphony Orchestra. Prior to coming to Idaho State he held similar positions at Friends University in Wichita, Kansas, and at The Latin School of Chicago. Under Dr. Brook’s leadership, the ISU Band program has grown in size and quality, and has developed into a complete band program with a strong regional reputation.

Dr. Brooks holds a Bachelor of Music Education degree from the University of Illinois at Urbana-Champaign, Master of Music degrees in Wind Conducting and Trombone Performance from the University of Cincinnati College-Conservatory of Music, and a Doctor of Musical Arts in Wind Conducting from Cincinnati. He is a member of the Music Educators National Conference, the International Trombone Association, and Phi Kappa Lambda, and is past- President of the College Band Directors National Association - Northwest Division. Dr. Brooks has appeared as a clinician, guest conductor, and performer throughout the Northwest and Canada. Ensembles under his direction at Idaho State have been invited to perform at numerous state and regional conferences. The ISU Wind Ensemble was selected to perform at the College Band Directors National Association Conference in 2004 and 2010, and ISU Jazz I Big Band toured Europe in 2000 and 2007. In 2012 the ISU Wind Ensemble performed at the Idaho Music Educators Association Biennial Conference in Coeur d’Alene, Idaho.