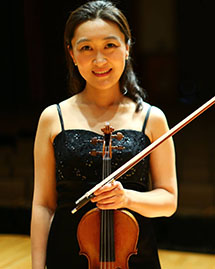 Dr. Hyeri Choi is Assistant Professor of Violin at Idaho State University, where she coordinates the string program, teaches violin, viola, and related courses, and guides the Summer String Institute

Ms. Choi is a passionate orchestra, solo, and chamber musician. As an orchestral musician, Hyeri has been appointed to serve as Concertmaster at the Idaho State-Civic Symphony in 2016-2017. She served as a guest concertmaster of the Williamsport Symphony Orchestra in 2016, assistant concertmaster of the Orchestra of the Southern Finger Lakes in 2012-16, and principal of second violin of the Seoul Metropolitan Youth Orchestra in Korea. As a soloist, Hyeri made her New York debut at Carnegie Hall's Weill Recital Hall as the First Prize Winner of 2014 American Protégé International String and Piano Competition. During her Eastman years, she gave a solo recital in the Musicales Concert Series at George Eastman House in 2012. As a chamber player, Dr. Choi is a member of the Piano Trio “Dante Deo”, which created by Eastman Alumni in 2013, and she was invited as a full scholarship fellow of the 1st and 2nd New Mexico Chamber Music Festival in 2013-14 in Albuquerque, NM.

Dr. Choi was on the faculty of Mansfield University of Pennsylvania and Rutgers University Mason Gross School of the Arts Extension Division in New Jersey. During the summer, she has been served as an assistant concertmaster at the Mostarts Festival since 2014 in Alfred, NY.