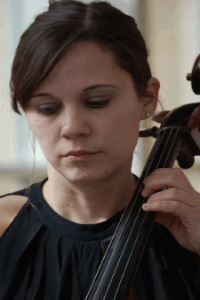 Dr. Eleanor Christman Cox is the Lecturer of Cello and Director of the Preparatory String Program in the School of Performing Arts at Idaho State University, where she teaches applied cello and various music courses.  She is also a cellist in the Idaho State Civic Symphony.

Known for her rich, sensitive melodic lines, Ms. Cox has appeared in recital as a soloist and chamber musician throughout the United States, both on faculty recitals and as a guest artist.  She has held faculty positions at Ripon College, Utah Valley University, the University of Utah Preparatory Division, and Salt Lake Community College.   As an orchestral musician she has performed with the Green Bay Symphony, Madison Symphony, Tallahassee Symphony, Choral Arts Philadelphia, and Ballet West.

On baroque cello Ms. Cox has performed nationally and internationally with such groups as the Wisconsin Baroque Ensemble, Madison Bach Musicians, Utopia Early Music, Jeune Orchestre Atlantique, and American Baroque Orchestra. As a proponent of new music, she has worked with composers John Harbison, David Ludwig, and Stephen Dembski, whose Suite for Solo Cello she premiered in 2010.