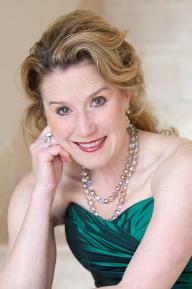 Diana Friedley has also performed many operatic roles including: Lucy in Menotti's The Telephone, at The Old Town Actors Studio (OTAS), Pocatello; Woman in Poulenc's La voix humane also at OTAS and ISU and The College of Southern Idaho as part of Women's History Month; Mrs. Webb in Ned Rorem’s Our Town, with Opera Idaho, Boise; Ichi Ban, in Napa De Monk, Queen of the Lost Waters of Mars, Bloomington Playwright’s Project, Bloomington, Indiana; Peggy Shippen in A Twist of Treason at the John Waldron Arts Center in Bloomington, Indiana; and Mimi Manini with the Zwei-Groschen-Oper's production of 1001 Nights in Venice at the Theaterhof in Humbach, Germany. Diana has also performed with ISU's Theatre/Dance department as Fraülein Kost in the musical Cabaret. Other operatic roles include: Fiorilla in Rossini's Il Turco in Italia, Adele in Die Fledermaus, Zerlina in Don Giovanni, and Musetta in a critically acclaimed production of La Bohéme, which received the 1995 National Opera Association's "Best Production" Award. Diana has also worked with numerous opera companies in New York including: Opera Orchestra of New York, The Bronx Opera Company, The American Chamber Opera Company, and The Liederkranz Foundation.

Directorial projects for The College of Arts and Letters Summer Musicals since 2014 include: The King and I; Anything Goes; Oliver! and Fiddler on the Roof.

Recent projects at ISU include: releasing "The Songs of Howard Boatwright" with ISU piano faculty, Professor Kori Bond, on Centaur Record label. In April, 2015 she performed Canteloube's Songs of the Auvergne with The Idaho State Civic Symphony. April 2016 Diana performed the Israelitish Woman from Handel's Judas Maccabaeus with the Boise Baroque Orchestra. Upcoming 2017 projects will include: recording the chamber-vocal works of Howard Boatwright with ISU Faculty and Guests, and singing as the soprano soloist in Vivaldi's Gloria for ISU's annual Joy to the World Concert.

Diana Friedley completed a Doctor of Musical Arts at Rutgers University's Mason Gross School of the Arts under Judith Nicosia, a Master of Music at Indiana University and Bachelor of Music at Westminster Choir College. Dr. Livingston Friedley is currently Professor of Music in The School of Performing Arts at Idaho State University in Pocatello, Idaho.

"In each work, Livingston Friedley created a different vocal character…she sang with a lovely florid tone that blended excellently with the strings…" George Warren for The Fresno Be

"...Soprano Diana Livingston as Fiorilla turned in a marvelous performance, both vocally and dramatically. Ms. Livingston is a gifted actress with an extremely flexible voice. The soprano has clarity, brilliance of tone and a seamless compass throughout her registers." Sonia Lewis for CLASSICNJ@AOL.COM

"...An extraordinarily beautiful personality, in the middle voice secure, and the high with an unchanging clarity, a loaded lyrical voice has Diana Livingston, whom the audience took as their own." Ernst Naredi-Rainer for Kleine Zeitung-Graz, Austria

"...the evening's star proved not to be one of the aristocratic primaries but the slightly secondary role of the chamber maid Adele, exquisitely portrayed by Diana Livingston. When this kind of acting was matched with her kind of voice, Adele easily became the most memorable part of the show...Adele was silly and as opportunity-seeking as the others but Livingston balances the stock negative stereotype with humanizing comic touches and vulnerability that made her like any of us." Robert W. Butts for CLASSICNJ@AOL.COM

"...Most effective was Diana Livingston as Zerlina. Livingston has the kind of charismatic stage presence one loves to see. Graceful as a ballerina, she smiles, cavorts and sings with beauty of tone...Her work in the famous duet, "La ci darem la mano" is a delight." Albert H. Cohen for The Home News & Tribune