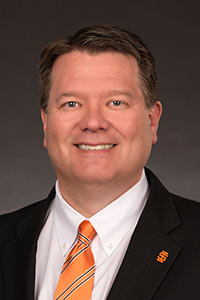 During his 17 years at Boise State, Satterlee led, set policy for and supervised the Campus Operations Division of the university. Among his notable accomplishments, he envisioned and created the university’s first Office of Institutional Compliance and Ethics, and within that office created a new focus group on Equity and Inclusion and Title IX compliance. This started new commitments to diversity on campus resulting in a re-envisioned Affirmative Action and Equal Employment Opportunity Office and its functions. He also led the creation of a university re-branding master plan, established a divisional new employee orientation program that was adopted for all new employees, envisioned and created a multi-year strategy that resulted in the planning and construction of over one million square feet of new campus facilities, led the initiative to professionalize and update campus security, emergency management and threat assessment programs in the wake of campus security incidents across the country, and more.