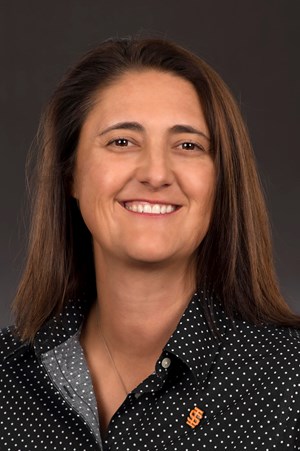 Currently serving as the Interim Vice President of Advancement, previously Pauline Thiros was named Interim Director of Athletics by President Kevin Satterlee on August 30, 2018 and on March 15, 2019 she was given the job full-time. Thiros is no stranger to Southeastern Idaho and the Pocatello community.

The Pocatello native was a volleyball star for the Bengals from 1991-94 and she has worked in various roles within the university for the last 23 years. She is currently the Associate Vice President for Development.

She has previously been the Director of Planned Giving, Director of Alumni Relations, and assistant volleyball coach and recruiting coordinator.  Thiros successfully directed ISU’s first capital campaign, which kicked off in 2001. The campaign raised more than $152 million and resulted in the construction of the Stephens Performing Arts Center.  She also served as the head volleyball coach at Century High School in Pocatello from 2009-2016 during which time her teams won 6 consecutive state championships.  She was 268-39 on her career and was 7 times named the IHSAA 4A Coach of the Year.

Thiros came to ISU in 1990 as a walk-on volleyball player, and her teammates voted her captain all four years. She earned Big Sky all-academic honors in her junior and senior seasons and was named the Big Sky Conference Scholar Athlete of the year in 1994. She was inducted into the ISU Sports Hall of Fame in 2006.