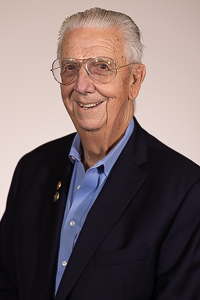 Bill Eames is a 1957 graduate of ISU's College of Pharmacy with additional management programs from Stanford University, Harvard University and Oxford University.  He was the owner of Bill's Drug Stores, a chain with 24 locations in northern California, until 1993, when he sold the enterprise to Longs Drug Stores.  Bill has also enjoyed being involved in banking and has been a director of several banks including Central California Bank, Western Sierra Bancorp, East County Bank and Sunrise Bancorp.  Currently Bill is president of William Eames and Associates.  Bill is involved in his local California community and has served as a director of the John Muir Hospital Foundation and the California Symphony.

Bill maintains close ties with ISU.  He has served as a member of the ISU College of Pharmacy Advisory Board and is a past president of the ISU Foundation Board.  He has been the recipient of the ISU President's Medallion and the ISU Alumni Association's William J. Bartz Award.

Bill and his wife, Karin, have generously contributed to many scholarship endowment funds and established the Henry A Eames Tool Fund, recognizing Bill's father, which provides funding for programs to purchase tools.  Most recently Bill and Karin made a substantial gift to name the College of Technology's new facility.