The ISU AGN-201m reactors core is comprised of polyethylene homogeneously mixed with Uranium Dioxide. The core is a right circular cylinder with a 25cm diameter. 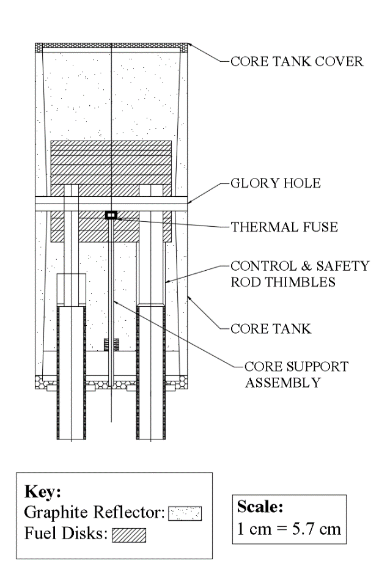 Most reactors in the United States use poison control rods, however the ISU AGN-201 reactor uses fueled control rods. The fuel rods are driven into the core via electromagnets that when energized attached to the base of each rod and a 24 Volt reversible DC motor drives the rod into the core to begin a controlled fission reaction. If anything out of the ordinary should happen, the reactor will scram, ceasing the fission reaction. The scram process will cut power to the electromagnets, allowing the fueled control rods to exit the core due to gravity and springs.

Shielding in a reactor is very important to ensure that the radiation exposure in the lab is minimal. The ISU AGN-201m reactor consists of multiple layers of shielding in and around the reactor. The moderator in the core consists of polyethylene and polystyrene in the thermal fuse. The polyethylene and polystyrene slows down the neutrons in order for a chain reaction to occur with Uranium 235. Next, the graphite reflector surrounds the core and reflects neutrons back so they can be used for more fissions in the core instead of escaping. Surrounding the graphite is a gamma shield composed of lead. The rest of the tank is filled with water to shield against fast neutrons. The thermal column in the reactor can be filled with water or graphite depending on the experiment being performed. The last layer of protection around the outside of the reactor is high density concrete and barite blocks.

The ISU AGN-201m reactor has four access ports (4” DIA) that penetrate the shielding up to the core and one centerline port (15/16” DIA) which penetrates through the center of the core. A linear, rotary, and closed loop oscillator are available for experimental use.

The SCA in the Nuclear Engineering Laboratory is a water moderated and reflected enriched uranium system. The assembly consists of an aluminum core tank, three sets of fuel spacing assemblies, core support devices, 150 fuel plates, as well as various nuclear instrumentation and measurement devices. This assembly allows students to construct different core configurations using the fuel plates in order to predict/verify different reactivity and multiplication factor calculations. The students can experiment with different core configurations to determine the most effective configuration. The students can conduct approach to criticality experiments with determining how many fuel plates are necessary for a given configuration to achieve criticality.