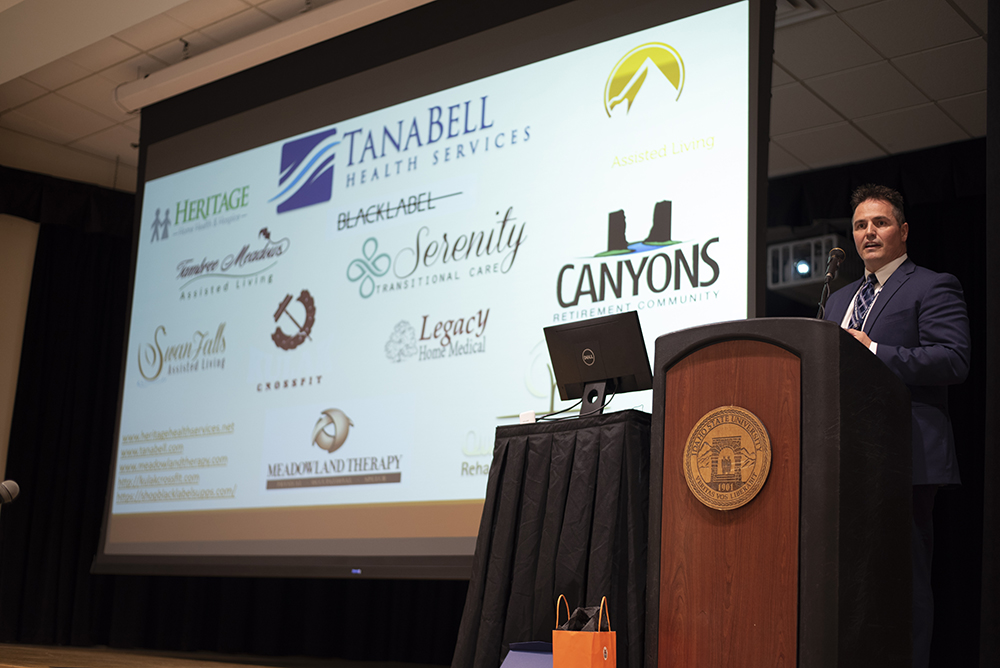 Last Wednesday, the College of Business hosted the annual Wells Fargo Speaker and this semester it was Pocatello native Troy Bell who is the CEO and President of TanaBell Health Services.

While attending college, he received some advice from a professor who told him not to go into long-term care because it would not be for him. Because of the respect he had for this professor, Bell didn’t and instead accepted an internship at the Bannock Hospital. From this experience, Bell was able to realize that in-fact long-term care was really what he wanted to do. After graduation, he took a job in Burley where he helped reverse the financial state of a facility and was eventually offered an opportunity to do the same thing with facilities in  California and Oregon. He accepted both and he added that that was a difficult time for him. But after a lot of hard work, he worked the same magic he had with the facility in Burley and turned them both into successful places of their own. In 2009, Bell opened his first transitional rehab facility and created the TanaBell Health Corporation. Since then, he has opened several facilities and is currently a member of the ISU Foundation Board.

The overarching theme of his presentation was that each individual person needed to, “...decide your why.” He said that his family was his why and that he did his job so that he can provide for them. He related a story of a board meeting that they had for his company where their initial slogan and concept was that they provided healthcare with all the comforts of home and Bell felt that that wasn’t a good enough why. They brainstormed and wrote things and rewrote until they were finally satisfied with their mission which had become, “We want to help all we come in contact with find joy in whatever journey they are facing.” That became their why and a key part of their mission and vision statements. Bell has also extended this idea not just to patients and clients but also to his employees.

“It’s important to me to provide a job for [my employees] so they can provide for their why...my number one customer is my employees...it’s important for them to understand that.”

It was clear while he spoke that he respected and relied on his team a lot and that that respect was mutual. He spoke highly of them and that without them, he wouldn’t be able to do the work he is doing.

He then spoke about being an entrepreneur and how it wasn’t simply a job, but a lifestyle.

“As an entrepreneur, I believe I have freedom. If my why needs me, I can go be with my why.”

He did say that being an entrepreneur is not for everyone because not everyone can take the risks or work all the time but that doesn’t mean that what they do is any less important.

Corinne Brown, a MAcc student, says her biggest takeaway from his presentation was that, “I thought it was cool how he was talking about how his customers are actually his employees and not the patients or doctors. His main focus is his employees and if they are happy, everything else will fall into place.”

In my own opinion, I agree with Corinne about that because if I heard an employer say that to me, I would work for them in a heartbeat. If your employees are taken care of, they will be more loyal to your company and do better work for you.

The biggest takeaway for me was that you needed to create your best self so that you could give more value to whatever work you choose to do because while there are times while you may not be your best self because of extenuating circumstances, you can always control what goes on inside and for me, one of the keys to being your best self is to become happy with who you are. That’s not to say you shouldn’t always be trying to become better but to be happy with your progress and who you are inside.

“Invest in yourself. Start creating a you that brings value.”