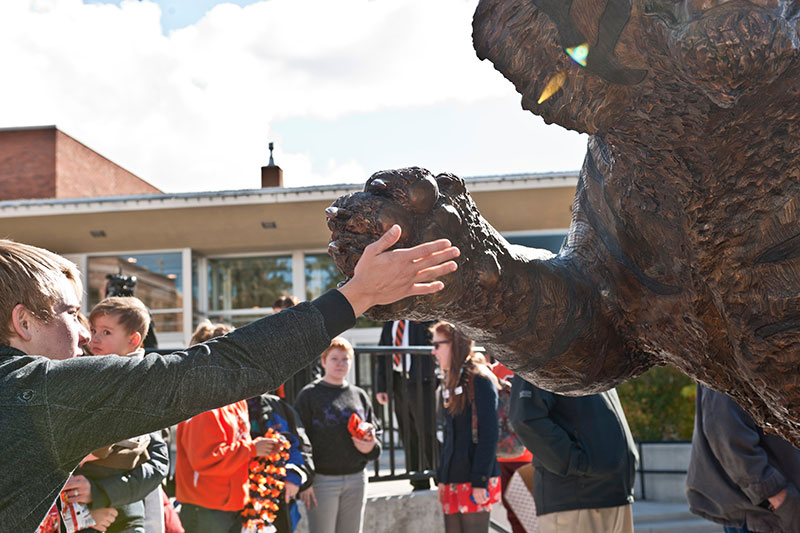 October is Homecoming month with tons of events to choose from and so many traditions to take part in. But, if you are new here… or haven’t heard yet, you may be wondering what some of these traditions are. Where did they come from, and what is their significance? This week, we thought we would dive into some of the things that make the college experience at Idaho State University memorable.

First, let’s talk about one of Idaho State’s most well-known landmarks, the pillars on top of Red Hill. These pillars are a big part of ISU and pretty much everyone who lives in Pocatello knows about these familiar fixtures on campus. These pillars were actually originally part of a funeral home and were donated to ISU in 1966 by Jack Henderson after the funeral home was relocated. At first, we didn’t really have a use for them and they simply sat behind one of the buildings. But in the 1970s, the decision was made to relocate them to Red Hill and it’s there that they have stood ever since. People have tried to explain their symbolism over the years but no official symbolism or meaning has ever been given to the pillars. But, for new students, it’s tradition to take the hike up Red Hill and take a new student photo to commemorate them becoming a Bengal.

Next up is our March Through The Arch event which is another tradition that takes place during New Student Orientation (NSO) and graduation. The arch in between the Physical Science building and Frazier Hall and is another one of the most recognizable landmarks on campus. This arch was actually the entryway to the very first building on ISU’s campus, called Swanson Hall that was built in 1901. The building itself was torn down in 1973 as it was determined to be no longer safe. But, the decision was made to keep the entryway arch of Swanson Hall. The March through the Arch tradition began in 2000 and was introduced by Valerie Watkins who was the alumni director at the time. During NSO,students will walk or “march” through the arch into campus, symbolizing the start of their academic life at ISU- as so many students first walked into Swanson Hall years ago. After graduating, students then walk through the arch again in the opposite direction, symbolizing their time ending as a student and stepping into the rest of their lives after college.

Some of you may wonder, what’s up with this bronze tiger in front of the Student Union Building? Why do we high-five it? Well, the bronze tiger’s origins are pretty simple. In front of Reed Gym, there used to be a paper mache tiger that was actually made in 1953 for a Phi Sigma Kappa homecoming float. The tiger was so liked that it was preserved and added as a permanent fixture outside of Reed’s Gym on campus for many years. It was taken down in 2013 but plans to replace it were made in 2010 and was approved by the Associated Students of Idaho State University (ASISU) committee. The competition for the new bengal design started in early 2012 and the winner was Malynda Cooper. In October 2012, the bronze bengal outside the SUB was revealed and student body president Matt Bloxham said that he hoped a new tradition would start where students could touch the paw for good luck. And so it did.

Another well-known face on campus, is Benny the Bengal, ISU’s mascot. Benny had his start back in the early 60s where he was originally named “Benjie” and belonged to the Sigma Kappa sorority. After they donated him, “Benjie” became a member of the cheerleading squad. After a few decades, “Benjie” underwent a name change and became Benny the Bengal, the mascot we all know and love today. The identity of the person under Benny’s mask is kept a tight secret, but he can be found at almost all sporting events and often at school events, cheering on the students and handing out high-fives to everyone.

Next is our fight song. We sing it during homecoming but where did we get it? The search for our fight song began in 1913, when the student body offered $5 to the person who could write the best school song. ISU finally achieved independence in March of 1947 and our fight song was revealed a year later during the ‘Great Day’ celebration in 1948. The song was penned by Jay and Del Slaughter and John Foreman who unveiled the song during the  second Great Day celebration of 1948 and it has been our school song ever since. If you’d like to see the lyrics, visit: http://headlines.isu.edu/?p=681

Another ISU tradition is our International Nights with roots going all the way back to the mid 60s. The International Student Association (ISC) started the event to help cross cultural barriers between American and foreign students and to “encourage a better understanding among Americans and foreign countries.” The International Night could be a little strenuous at times and groups clashed over the years. There was one year where the conflicts were so numerous and so bad, that the event was cancelled for that year. But it’s a tradition that we proudly continue to help foster understanding and communication between our students of many nationalities at Idaho State. International Night is usually held in either March or February so keep an eye on the calendar for the upcoming dates.

Finally, the last traditional we will cover is Turner Day. Why is this day so important to us? Well because Senator Theodore Turner was one of the main catalysts responsible for making Idaho State a four-year university. ISU began as the Academy of Idaho in 1901 and began to provide education to the Pocatello area residents. In 1913, Senator Turner along with Senator E.A. Bryan proposed a bill to create the Idaho Technical College. It experienced little opposition and passed with no issues. It was however later vetoed by the governor which disappointed many. In 1915, the Academy was renamed the Idaho Technical Institute and was allowed to grant two year degrees. It was a long time before Idaho State University would become a four-year institution and throughout all those years, Senator Turner was doing everything he could to support the school in its mission. Finally, in 1947, it all came to fruition when Governor C.A. Robins signed the bill transforming Idaho Tech into Idaho State College and granting it the ability to give its students four-year degrees. The signing of the bill launched a massive celebration in Pocatello that lasted for almost the entire day. In memoriam of Senator Turner’s efforts, on March 3, when we officially became a four year college, we have Turner Day which is a day where we do service on campus to honor his memory.

These are just a few of the most prominent and long-standing traditions at ISU. Especially around this time of year, students will partake in other activities like a bawn fire, the ISU Ambush mud race, the slip-and-slide on Bartz Field and so much more! Knowing and taking part in your university’s traditions is a major part of the college experience. So, we encourage you to get involved with Greek Life, activities put on my the Student Activities Board, the Union Program Council, your college and more! Because you only get to experience college once in your life (unless you keep coming back) make sure you make the most of it! If you’d like to see some more of our traditions visit: isu.edu/traditions

Charlotte McBride is a junior at Idaho State University where she is studying Mass Communication with an emphasis in Visual Communication. As a student, McBride has become passionate about research and writing and yearns for more knowledge in all subjects pertaining to an education. McBride’s blog articles are geared toward supporting the interests, concerns, and queries of her fellow college students. Through her research and the plentiful resources available to her as a student in a university, McBride hopes to bring valuable information to students new to navigating the world of academia. McBride works closely with the Idaho State University College of Business and other campus resources to extract the most pertinent information for her readers.