Is a Master's the New Bachelor's? 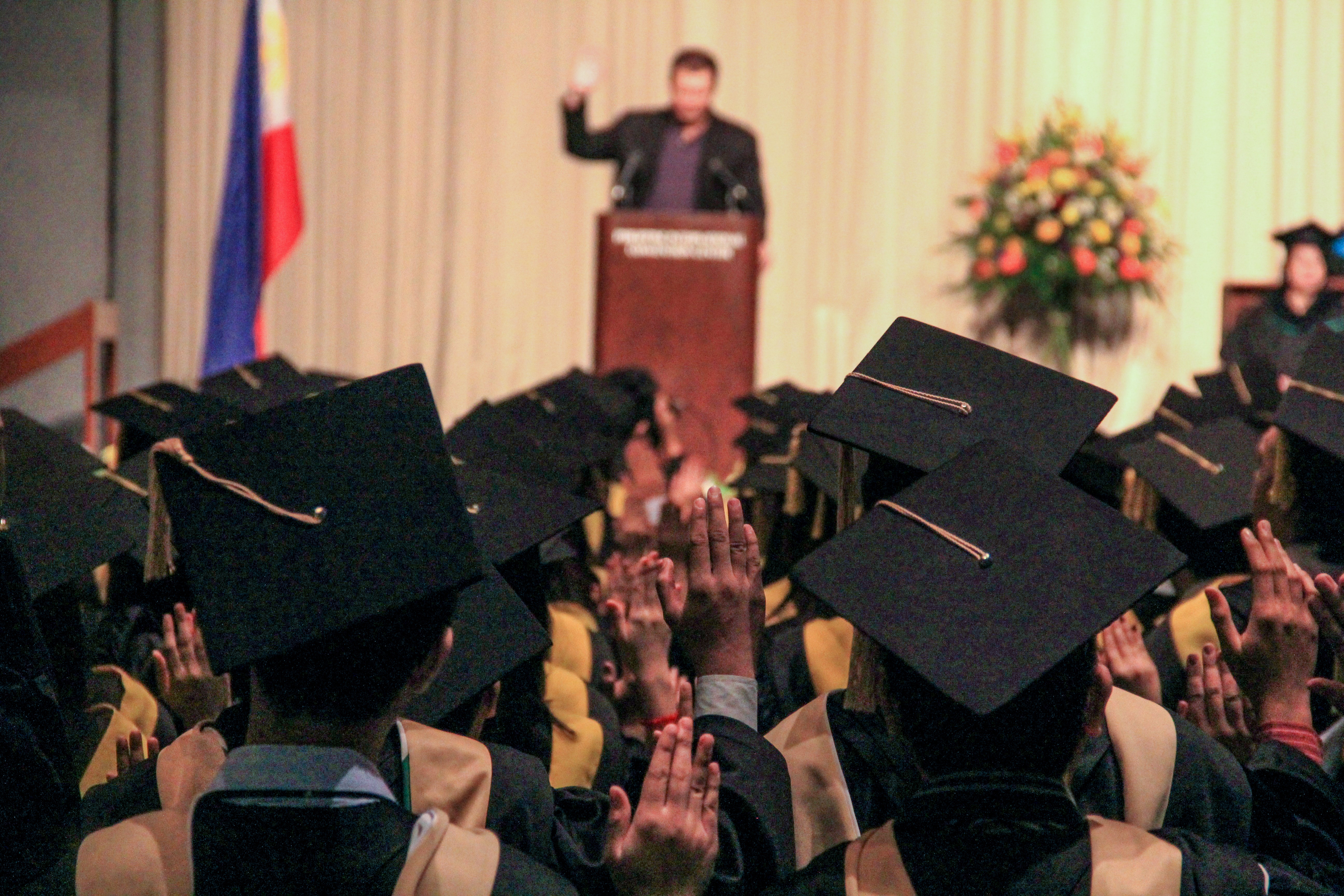 As of 2015, 16 million people in the U.S.-which equates to about eight percent of the population- had a master’s degree, a 43 percent jump from 2002. (Nelson) While, overall, that may not seem like much, this number actually shows the enormous growth in the amount of people getting masters degrees in the U.S. But the question is, why? Why are people choosing to further their education beyond the bachelor’s degree now more than ever?  It has everything to do with the increased potential.

To a student currently studying (or soon to be studying) in an undergraduate program, on his or her way to obtaining a Bachelor’s degree after four - five years of rigorous study… the idea of continuing your education beyond that may seem like a somewhat painful idea, both to your aching brain and your diminishing bank account. But really, the increase in Americans with masters-level degrees has some underlying reasoning and major benefits that, for the sake of your future, really could outway the pain that the idea of grad school provokes. To ease your mind a bit think about this- at the Idaho State University, for example, students who enter one of their five graduate programs could potentially complete his or her degree in just one year and for an expense that is minimal compared to the potential in increased salary outcomes that come with those extra few letters behind your name (MBA, MAcc, etc.).

For example, if you’ve gotten your undergraduate in business, you may have already taken the required Core I classes for ISU’s MBA. If you get those classes waived, you’d only need to take Core II classes which only adds up to 24 additional credits or just one more year of schooling, depending on if your full-time or part-time. How do you define full or part-time in a graduate program at ISU?  Instead of 12 credits being considered full-time (as it is in undergraduate programs), you can take only 9 credits and still be considered a full-time student in a master’s program at ISU.

Alright, so now that you know that getting a graduate degree won’t necessarily take you all that much time (definitely not as much time as your undergraduate degree), how much is it really going to cost you? Well, at least at Idaho State University, earning your graduate degree is incredibly inexpensive. At competing universities, tuition is much more expensive, even if they consider you in state like universities in Utah. At the University of Utah, the estimated expenses for a student graduating with an MBA is just over $9,000 a semester- and that’s for Utah residents. At Boise State University, for resident students, tuition is just shy of $4,700 (and while close to ISU’s costs, an MBA at BSU can take anywhere from two to three years)  and for non-residents, almost $12,700.

And those are just the local universities. The University of Chicago Booth School of Business offers schooling at $24,000 per quarter  and at the University of Washington Foster School of Business, tuition per semester  is $10,749. These numbers might be a little staggering, but ISU offers some of the lowest graduate tuition rates at a cost of $4,688 a semester which is only a $1,000 difference when compared to undergraduate tuition.

Okay, so it’s not as much money as you would think… especially if you only have to complete your degree in a year!  Graduate programs also have a variety of financial aid options available to students. Here are a few ideas of what you can get. At ISU, they offer graduate assistantships, lab assistantships, Non-Resident Tuition Waivers, the MBA-NIATEC scholarship program, and other non-resident tuition waivers for those in the healthcare-related programs.

Graduate assistantships allow students to work in a variety of capacities in the Idaho State University College of Business. Students can work for departments helping with grading, research, marketing, recruiting, and more. Or, they can apply for the Bengal Solutions program. This program is an extremely beneficial real-world driven program that allows students to do research and consulting for major companies and startups. Some of ISU’s students have even landed jobs directly from the work they are doing in the Bengal Solutions program. As a GA, students are expected to work 19 hours per week an earn just over $13,000 over their two semesters of work, plus tuition is totally paid! Lab assistants earn the same benefits at $18/ hour!

Non-resident tuition waivers are exactly what they sound like: they treat you as an in-state student which dramatically reduces tuition. They are based on available annual funding and have some requirements before they can be obtained.

The MBA-NIATEC scholarship is a competitive scholarship where students are awarded scholarships to create cyber safeguards for the government. As payment for the scholarships they earn, students will work for a government agency for two years after graduation, thus ensuring a 100% placement rate. Beyond paying for tuition, this scholarship also offers a $32,000 stipend, health insurance, funding for books, and a professional development allowance .

Alright, so maybe it’s not all that much extra work or money… at least at some schools. But, what’s the benefit? Why even take the extra time and money to earn a graduate degree?

According to “The Economic Value of College Majors,” a 2015 study by Georgetown University, college graduates with a bachelor’s degree earn an average annual salary of $61,000 over the course of their career, while those with a graduate degree earn $78,000 annually.” This same study compared annual median salaries between those with bachelor’s degrees and those with master’s and the difference between those with a business undergrad and those with an MBA was almost a $20,000 difference. (Williams https://www.goodcall.com/news/how-much-more-can-you-make-with-a-masters-degree-01529)

Increased earning potential isn’t the only thing you can gain with a master’s degree. Many employers in the business actually require that you have a masters or professional degree before applying to their companies, especially in Healthcare Administration. While entry level jobs may only require a bachelor’s, many higher ranking and high-paying jobs with more responsibility will ask that you do have a masters. “Common job titles for a professional with a master’s degree in health administration include: Chief executive officer, Chief operations officer, Clinic manager...Facility manager, Healthcare consultant…” among others. (https://mhadegree.org/health-administration-salary/) John Ney, director of Professional Development at ISU, says that having a graduate degree shows that you’re willing to take on more. It shows that you’ve got knowledge in specific areas that your peers may not have. He said that this knowledge is especially important if you want to get into the higher levels of business.

If you have a master’s degree even when just getting a entry-level job, it will still give you an edge over others because you might be a more likely candidate for promotions because you have more academic experience and knowledge than your peers do. For example when it comes to accounting positions “...most accounting firms expect or at least prefer a Master of Accountancy or an Master of Taxation for the additional technical knowledge and application skills that they provide. Students coming from our MAcc and MTax are highly recruited by accounting firms and other organizations,” says Robert Picard, Ph.D., a professor who teaches accounting at the ISU College of Business. Having a graduate degree really puts you out there and many employers will appreciate that you took the time to gain that extra knowledge that  can enable you to do your job better than without it.

“When speaking with potential students about why they should get an MBA or related graduate degree such as a masters in healthcare administration, I try and get them to stop thinking like employees/prospective employees and instead think like hiring managers,” says Neil Tocher, Ph.D., a management professor at ISU. He relates an example of a busy hiring manager who doesn’t have time to look at a growing stack of resumes for an open position in his firm, and because of this, only has 15 minutes to dedicate to looking at 100 resumes! However, since he likely has an assistant, this number is cut to 35, and after a brief scan of his criteria (which includes an MBA, experience managing teams, and persons that show proof of good and effective decision making), he discards 15 applicants who lack MBAs. Right there, those without a masters degree are off the table. Tocher says that when it comes to resumes for big companies who likely have a ton of candidates to consider, “...you better jump off the page if you want to get noticed.”

As you can see, there is a cornucopia of advantages to having a graduate degree. If you are interested in further pursuing your degree, it’s a great idea to speak with an advisor about your career aspirations and what a graduate degree could do for you. Make an appointment with the Idaho State University, College of Business Graduate Advisor here or call 208-282-2504.