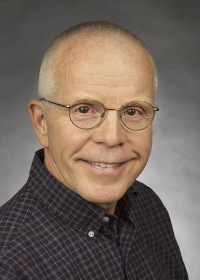 During my doctoral program at Oregon State University I had the opportunity to conduct research in two quite different areas of endocrine physiology. Those being, (1): the hormonal regulation of blastocyst implantation in the mink, a species exhibiting delayed implantation, and (2): the role of hormones in regulating the onset of winter fur growth in the mink.

In the area of reproduction, that work culminated in the demonstration of prolactin receptors in the uterus of this species, which at the time was a novel concept. Today, others have shown that the mammalian uterus expresses genes for both prolactin and the prolactin receptor, strongly suggesting not only endocrine but autocrine and/or paracrine effects of prolactin on the uterus.

Much work needs to be done to determine which genes are regulated in the uterus by prolactin and their role in reproductive function. From the fur growth studies, a major contribution was the finding that the pineal hormone melatonin plays a critical role in controlling hair growth in this species, in part, through its inhibitory effects on prolactin secretion.

As a professor at Idaho State University, research efforts during my early years were focused principally upon the effects of adrenal hormones in regulating hair growth cycles. We demonstrated that bilateral adrenalectomy of mink, induced almost immediate onset of hair growth cycles, that interestingly, appeared to cycle continuously with only brief, if any, resting (telogen) periods. Thus, instead of only two hair growth cycles each year, such animals might cycle as many as 6 times, or more. Injections of the adenohypophysial hormone ACTH (adrenocorticotropin) into the skin of mink induced local onset of hair growth cycles. This finding contributed to a rapidly growing field of research, wherein others have demonstrated that the skin of mammals expresses most if not all, of the hormones and their receptors that constitute the "stress-response" system. That is, corticotropin releasing hormone (CRH), CRH receptors, ACTH, and ACTH receptors.

Currently, I have returned to the study of reproductive endocrinology. Specifically, we are investigating the potential role of catecholestrogens in preparing the uterus for blastocyst implantation. Major catecholestrogens, are 2- and 4-hydroxylated molecules of the parent estrogen, estradiol. It is known that the uterus converts estradiol, produced by the ovaries, to such catecholestrogens, which then exert biological actions on both the uterus and blastocyst. The local production of CE's by the uterus, and their actions on that organ, are novel concepts. Catecholestrogens are metabolized very rapidly, such that little if any makes its way into the systemic circulation. Thus, their actions are of a paracine and/or autocrine in nature, having profound, and we believe, very important physiological effects, which can not be detected through the measurement of blood concentrations of the hormone metabolites.

We are presently, examining the effects of the catecholestrogens, 2-hydroxycatecholestradiol (2-OHE2) and 4-hydroxycatecholestradiol (4-OHE2) on glycogen metabolism in the uteri of rats and mink. Our most recent efforts show that 4-OHE2 stimulates glycogen accumulation in the rat uterus, equal to that of estradiol. Moreover, 4-OHE2 had a much greater effect on the uterine glandular epithelial cells of the rat, than on the luminal epithelium. And, finally, the effects of 4-OHE2 were significantly greater in parous rats (those that have previously given birth) when compared to nulliparous animals (those that have not yet produced offspring). This latter finding may, in part, explain why litter sizes in rats are almost always greater after the first pregnancy.

Many exciting studies await to be conducted in this most fascinating field of reproduction research. Ultimately, we hope that our efforts will contribute to a better understanding of blastocyst implantation. Because a high percentage of reproductive failures take place after fertilization but prior to implantation, we envision that the efforts of this type of research may one day contribute to a pharmacological means of improving blastocyst implantation. Such an outcome might lead to cures for some types of human infertility, increase farm animal production and perhaps be used to improve reproductive success in endangered species.