The Healing by Dominique Shaw
Death of a loved one changes the soul. You never get over it; you learn to live with it. Death taught me to love deeper and is still teaching me to love myself and accept my imperfections. On May 23, 2016, my mother Bobbi, unexpectedly passed away at the age of 48. She was an abstract artist who used complimentary colors of acrylic and oil paint, to fluctuate the tone of the canvas; I am so grateful for the memories of our conversations about art and the meaning of our work. Her tragic passing brought me pain but has also allowed me to use art to heal trauma for past, present, and future generations.
My artwork reflects the personal narratives of myself, and those that I love who live with mental health conditions. The mental health conditions, I myself have, can be torture at times. Through the dark times I am reminded, art brings healing ̶ I express this through my work. Over the course of my B.F.A., I have grown quite fond of mixed media-painting and metal-smithing. These mediums allow me to be vulnerable enough to relate to others who are going through similar trials and be a voice for those who suffer. Through the darkness, love and light always prevail.

I Love, I Speak, I See, and I Understand

This Is Not Our Home

Ashes to Ashes Dust to Dust, and Breathe

Ashes to Ashes Dust to Dust

Some of This is Real: Milo Bossler's B.A. Senior Thesis Exhibition

Some of This is Real - an exhibition of artworks by B.A. student Milo Bossler - is on display in the John B. Davis Gallery, located on the first floor of the Fine Arts building. The gallery is open to students and the community from 12 to 6 pm, Monday through Friday.

This exhibition will be on display from October 5th through October 22nd.

I have been chronically fixated with drawing for as long as I have been alive. Though there are several reasons for this, I will strive for brevity by stating solely that I am fascinated with the way in which the drawings I make from real-life references will reflect, openly and with emphasis, the particularities of my own perception. In this way, the images I make do not reflect that which is outside of me so much as they reflect that which passes through me.
When painting, I always start with photographs. Each painting starts with a collection of images that seem to relate to each other, for reasons which are yet to be clear and which I intend to at least glimpse in the process. Several of the photographs I use are my own, some are photographs I have found. In other cases, I may work from memory, or I may work from what appears to be nothing, in which case the resultant image is a surprise which grants visibility to something unseen.
Part of what I am interested in is an interrogation of the grounds on which we are readily apt to perceive something as ordinary, and to accept it as real. Art, broadly speaking, has been historically bound to a criticism of tradition - a continual questioning of what is to be expected, and of what is deemed acceptable. This is the space in which I mirror what I see, and in which I have tentatively detected a kind of liberty to render my own perceptions and experiences to a degree which may not be confined to the present visual paradigm. If these images should breach the parameters of intelligibility, then they speak to the points at which these parameters are in need of revision.

How Will I Know When the Rain Stops? - Acrylic on canvas, torn notes

How to Hide a Ghost - Charcoal

I Can See You with My Eyes Closed - Acrylic on canvas

All Their Eyes Are Broken - Acrylic on canvas

Thank You - Acrylic on Canvas

The End in Slow Motion - Acrylic on canvas

You Were Followed - Acrylic on canvas

Invocation of a Paralyzed Light - Acrylic on canvas

An exhibition of artworks by B.A. student Emi Grunig is on display in the CompARTment Gallery, located on the fourth floor of the Fine Arts building. The gallery is open to students and the community from 12 to 6 pm, Monday through Friday.

This exhibition will be on display from September 14th through October 1st.

When looking at my current body of work it may be hard to identify a commonality amongst my pieces. My art varies in mediums, color choices, subject matter and technique. Therefore, my work does not fit into the mold of a specific “style” of art. However, what these pieces do show is my exploration through the art world.

My work began as acrylic paintings of still life’s. This was my comfort zone. Then, I began to explore different mediums: oil, charcoal, embroidery, ink, and even a stretch to ceramics. My interests and influences began to expand as my knowledge of the art world widened. With this, I began to create art that was influenced by abstract art, pop art, expressionism, realism, and so many other art movements.

For example, my paintings that depict Japanese cuisines, Somen and Ocha, were inspired by pop artist Wayne Thiebaud as well as the contemporary painter Josephine Halverson. Motivated by Thiebaud’s depiction of childlike nostalgia in the form of cakes, doughnuts, lollipops, and pies, I chose to depict my own experiences of child-like nostalgia via Japanese food. Halverson’s influence can be observed in the style of the paintings as well as the earthy color palette and the depiction of realistic imagery. Other works, such as my painting Self-Portrait, was influenced by the work of Expressionist artist Egon Schiele and his painting Seated Woman with Bent Knee. Similar parallels can be drawn between the two paintings including the use of stylized forms, distinctive posing, muted color palette, and the incorporation of a variety of mediums.

My painting titled Closed for Covid was inspired by the work of Edward Hopper in the 1930s. Just as his painting Early Sunday Morning depicts the desolation of the American Life apparent during the Depression, Closed for Covid depicts the isolation caused by the Corona Virus. Hopper depicts the quiet and melancholy streets of what appears to be a small town. The shops are closed, and the lack of a human presence connotes a feeling of emptiness. Closed for Covid depicts similar imagery that was seen during the economic shutdown. My painting was inspired by a movie theatre in a small town in rural Idaho. This movie theatre had to close down due to Covid-19. On the marquee sign of this theatre, it read, “Closed For Covid.” A somber analogy to the negative impact that the outbreak has caused on so many small businesses in the U.S. I wanted to create imagery that was dismal and bleak, similar to what Edward Hopper depicted in several of his paintings.

All of these influences, among many others, have impacted my current body of work. The varying styles of art as exhibited in the show, does not adhere to a specific style and signature of art. Instead, my work reflects and encompasses the expansion of the art world in my eyes.

Closed for Covid - acrylic on canvas

Context and Pain: Exploring Beauty in Darkness is an exhibition of artworks by B.F.A. student Jessica Isom on display in the John B. Davis Gallery, located on the fourth floor of the Fine Arts building. The gallery is open to students and the community from 12 to 6 pm, Monday through Friday.

This exhibition will be on display from September 14th through October 1st.

Paradox is the basis of our perceptions of reality. Without deep pain, one may not experience great joy. Without experiencing terrible anxiety or being uncomfortable, I may never understand my bed's comfort on a lazy Saturday morning. It is vital to experience beauty in contextually bad moments—the profound and striking aesthetic when reality punches you squarely in the face. In moments of hard truth, one must also be inspired by unreality—the strange moments in life that seem dissociated from daily actuality. The question becomes: if I could completely separate myself from reality, would I still carry the same baggage. If I could step into an alternate universe, would that universe still carry the heavy burden of this one? Is there ever any escape from the suffering of living, and if there was, would the meaning of serenity be lost without this present context?

Through painting, sculpture, and fibers, I explore my pain and everyday fears of societal and personal expectations. I use tangible materials to express my feelings and anxieties about accepting hard truths—Accepting my shortcomings and inner self resentment. I use anatomical motifs to describe the human impact that people have on the world and each other.  I also employ botanical images to express the incredible beauty and terrifying totality of nature's laws. I use thread in embroidery the same way I use paint to combine and layer colors creating slightly surreal rich visual imagery. My work is completed obsessively and instinctually, consuming large areas of real estate of mind. My work does not represent reality but rather the idea of reality distorted through layers of the subconscious mind. It reflects my own sense of reality through the context of my psyche; a dark yet tentatively hopeful interpretation of this strange thing that is existence. 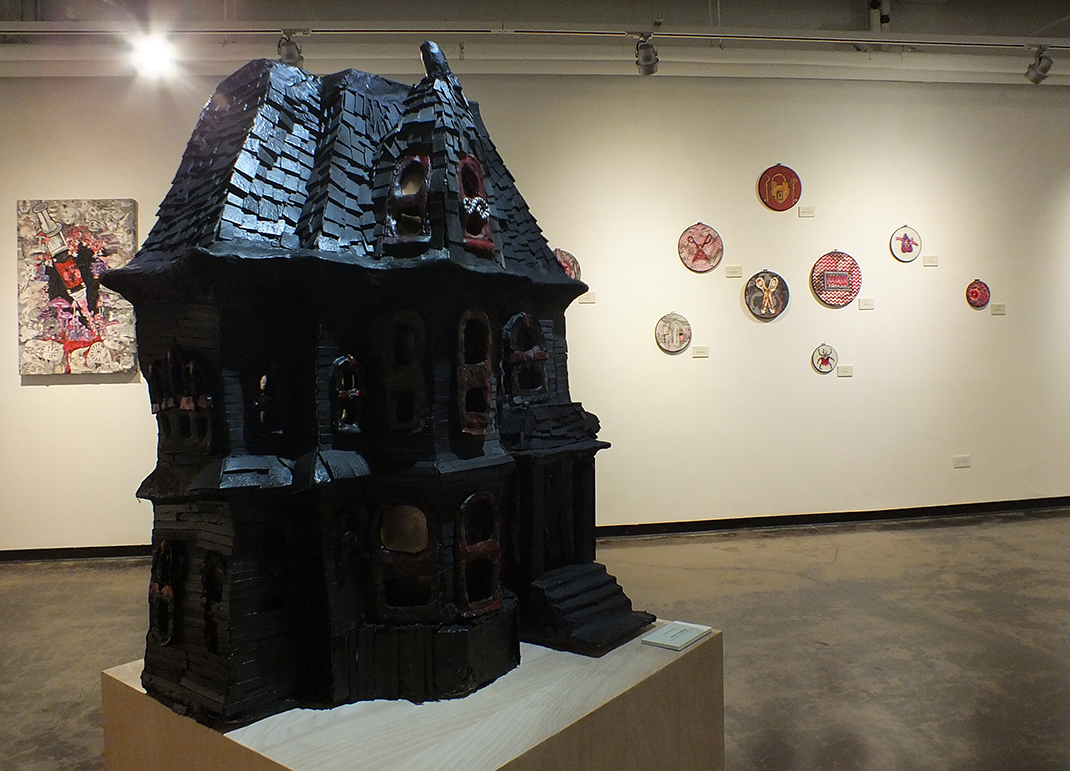 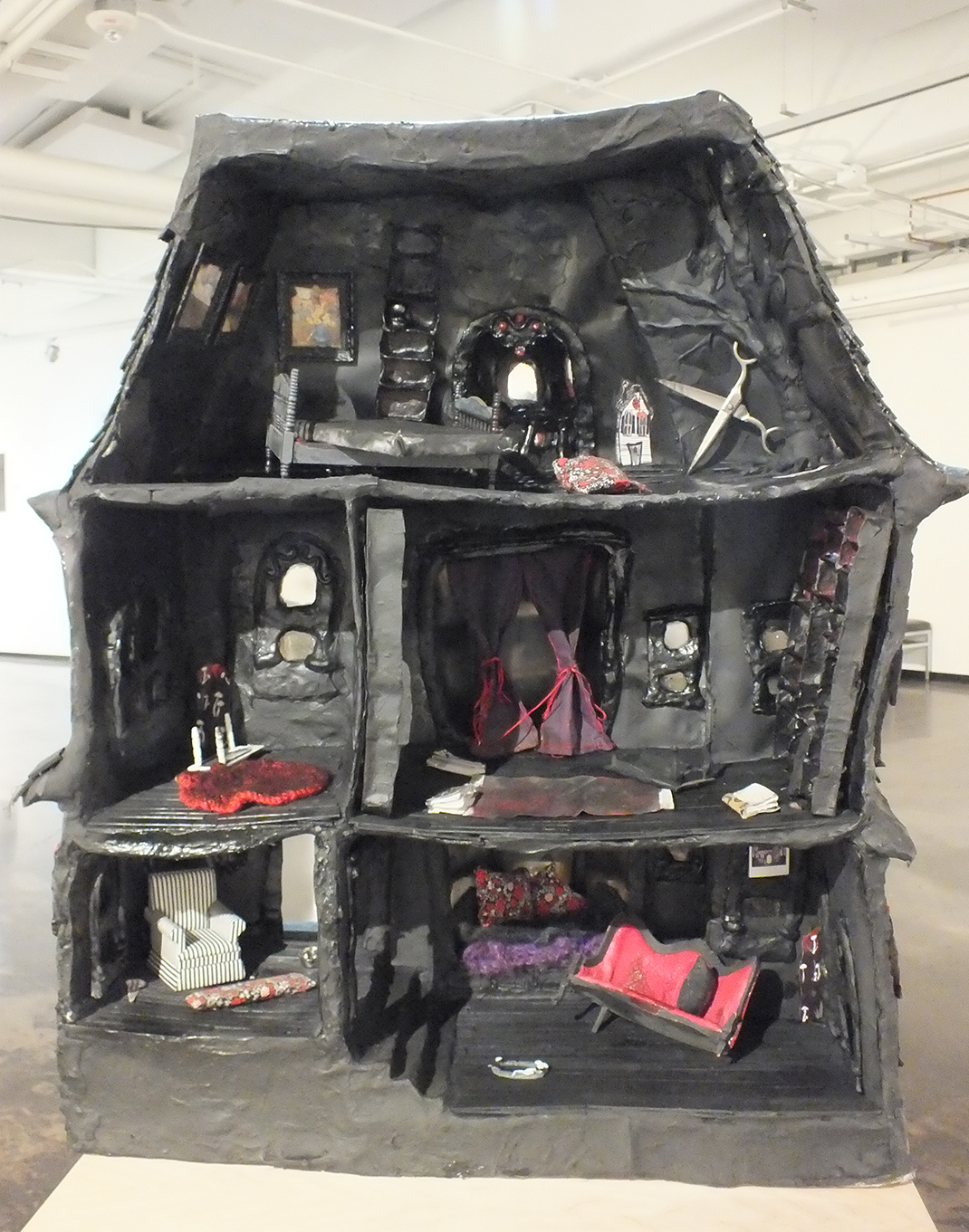 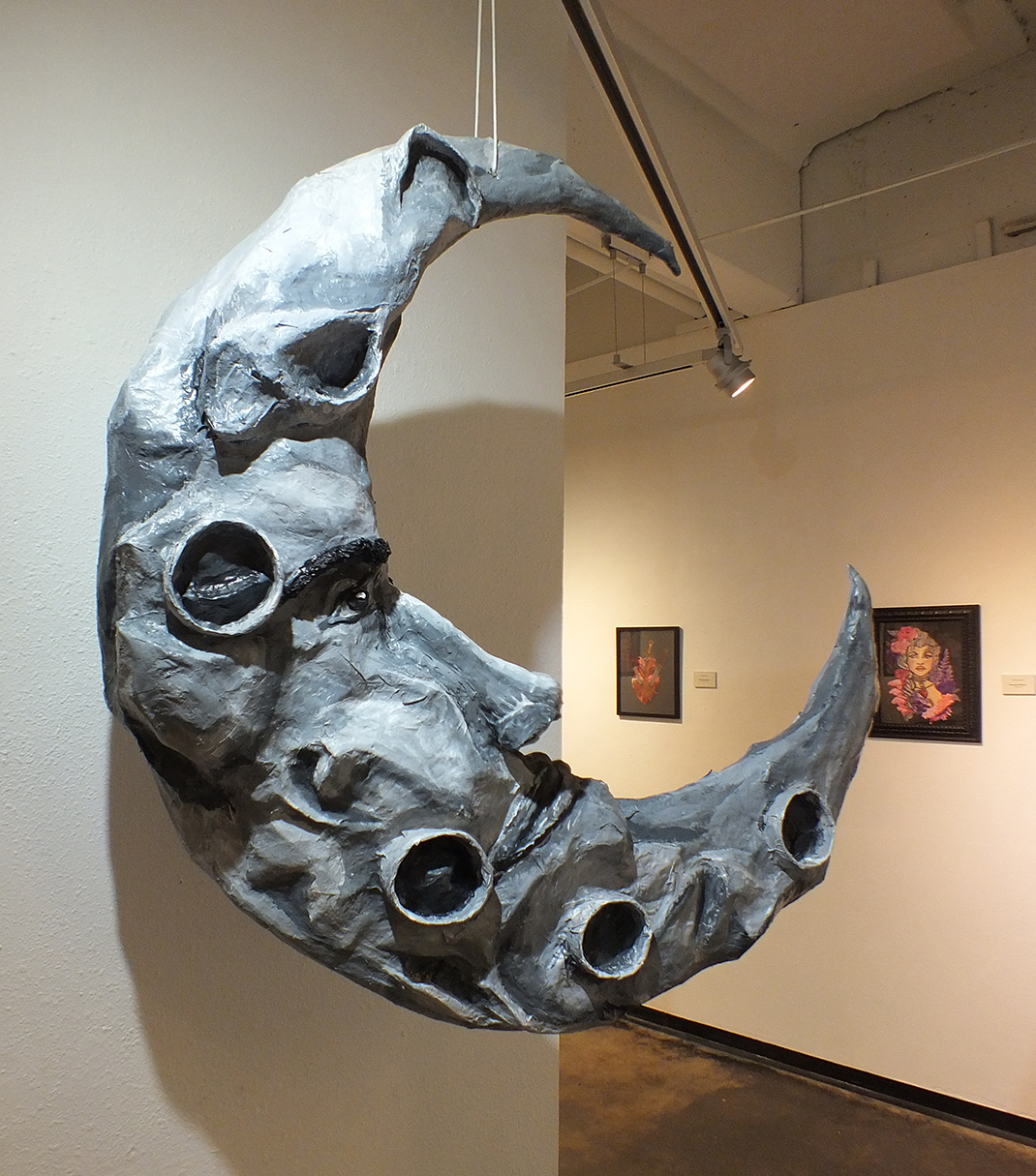 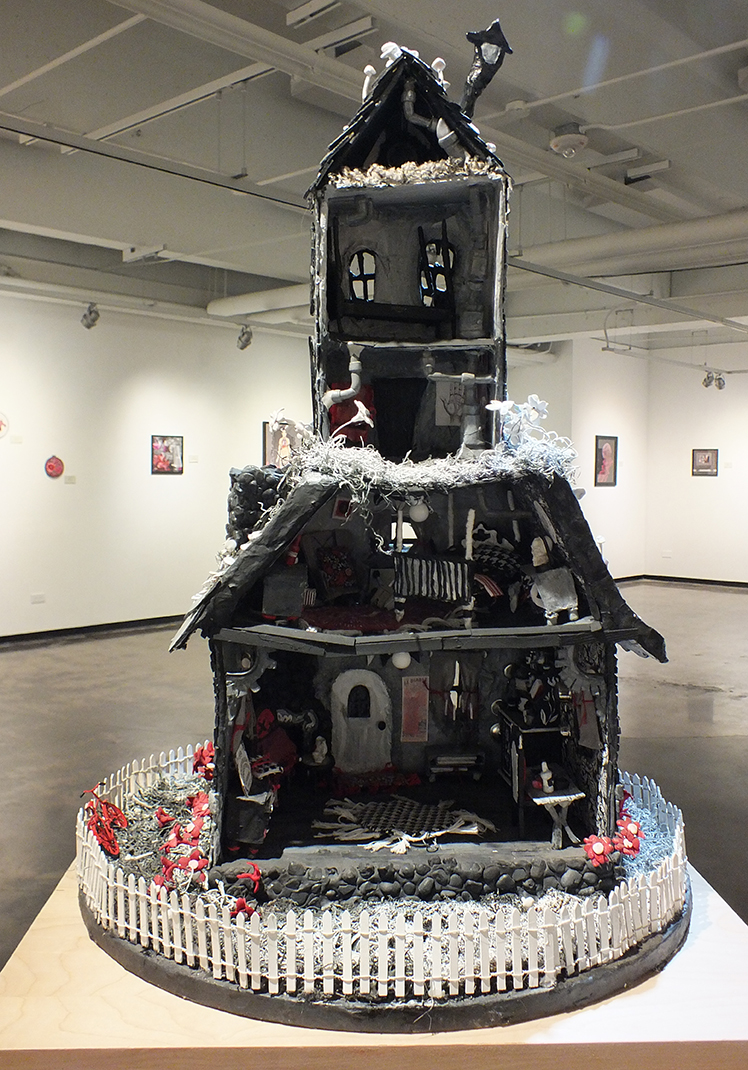 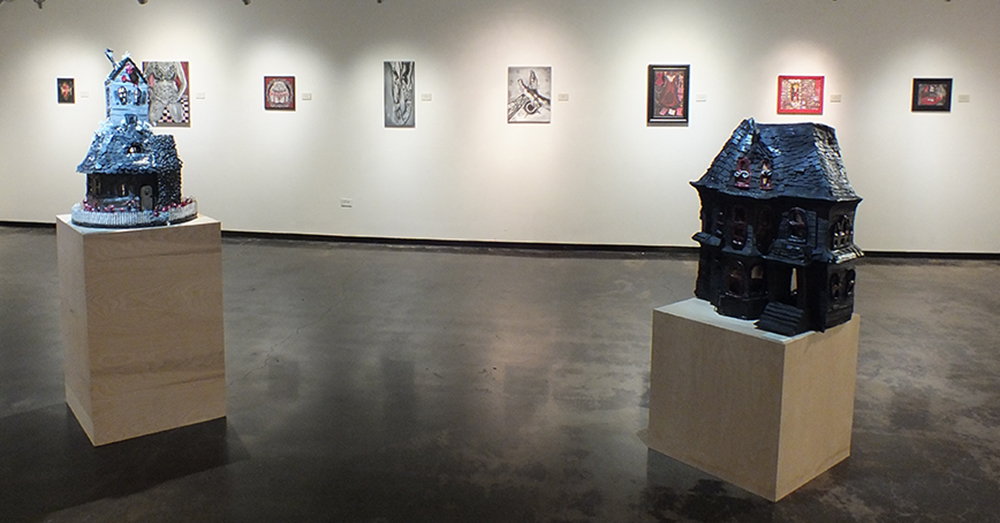 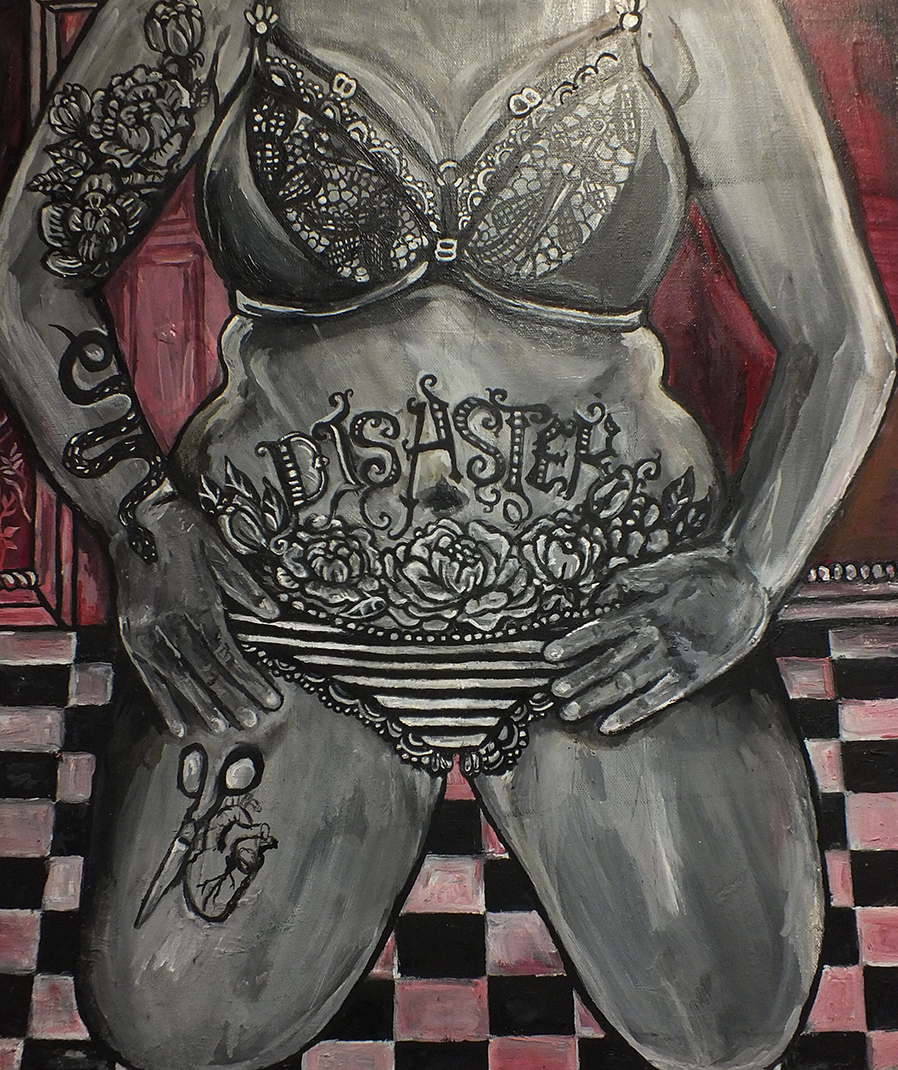 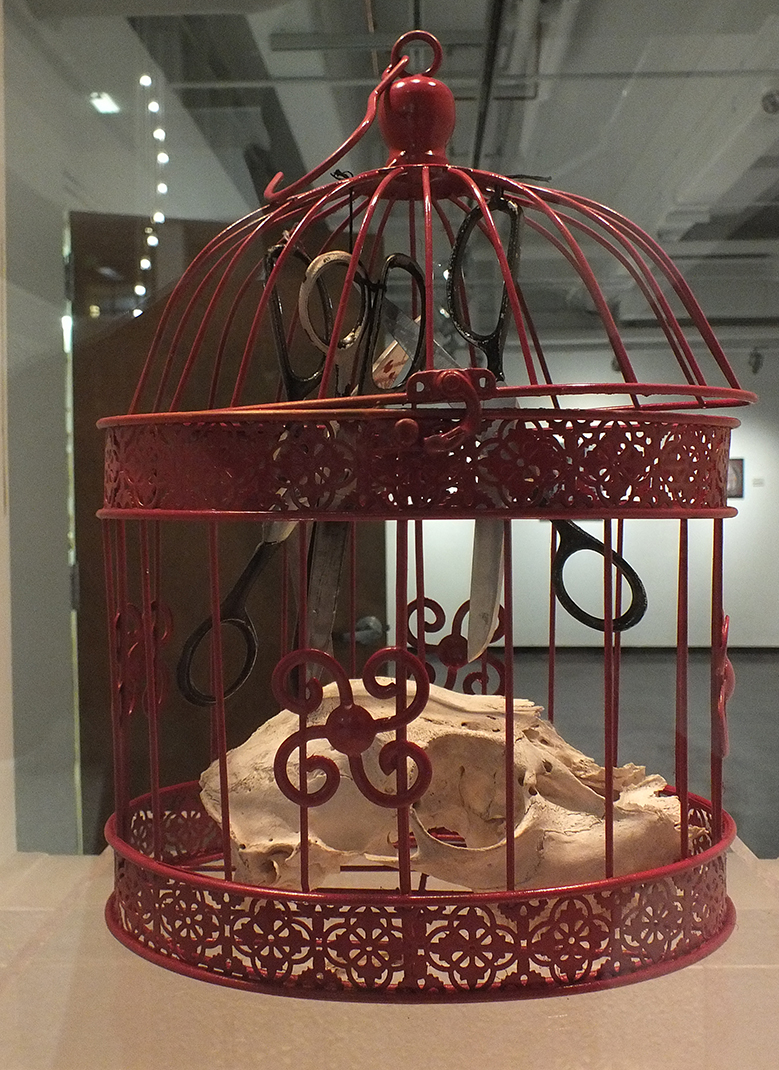 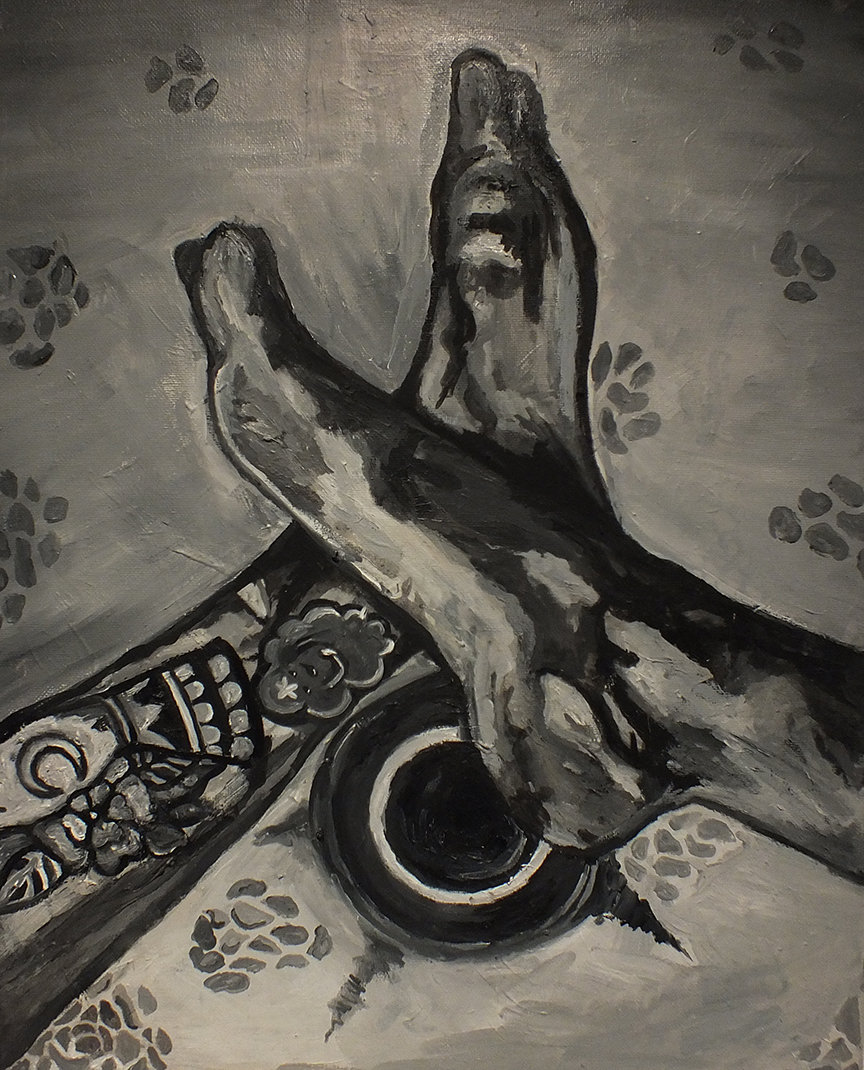 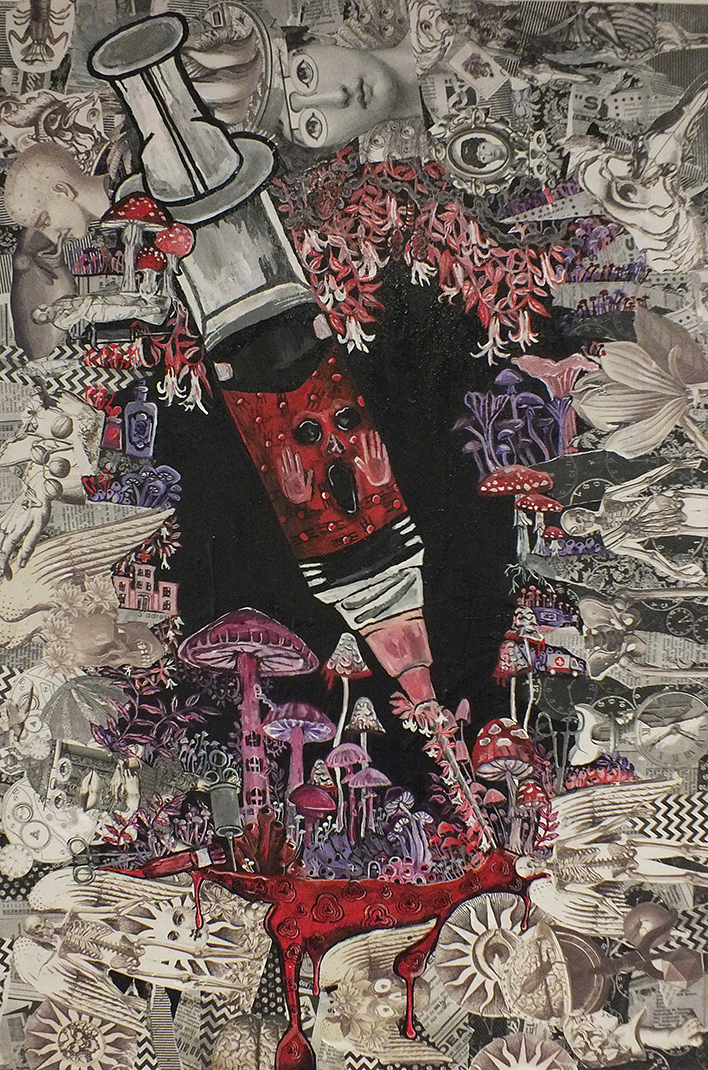 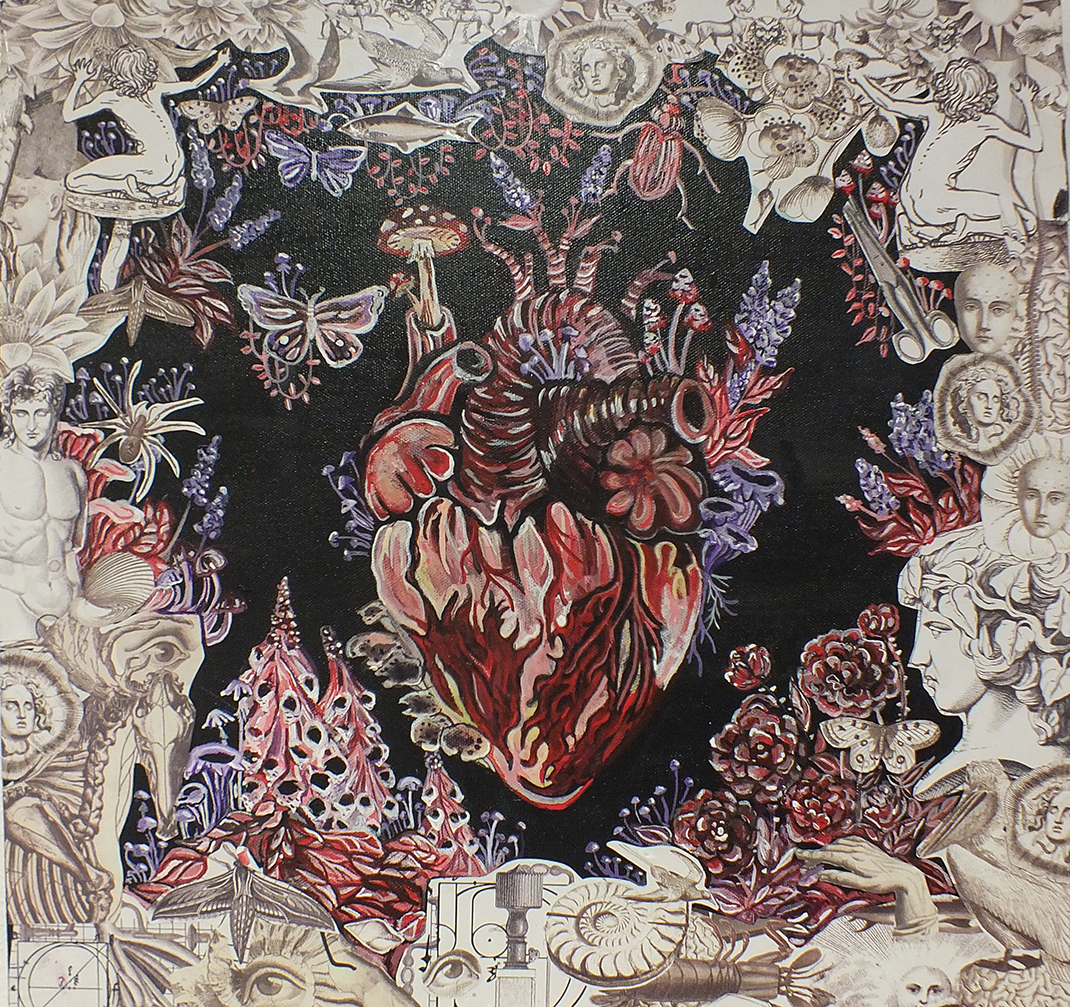 Pinned to Facade, Trapped in Static, and Bedroom of the Mind - Mixed Media and Digital Painting

On the Edge of Isolation, Digital Liaisons, and In the Lost and Found - Mixed Media

The Life-On-Line Exhibition is on display in the John B. Davis Gallery, located on the first floor of the Fine Arts building. The gallery is open to students and the community from 12 to 6 pm, Monday through Friday.

This exhibition will be on display from August 24th through September 10th.

An exhibition of artworks by B.A. student Collete Stosich is on display in the CompARTment Gallery, located on the fourth floor of the Fine Arts building. The gallery is open to students and the community from 12 to 6 pm, Monday through Friday.

This exhibition will be on display from August 24th through September 10th.

"I know there will always be someone that throws down paint better than I do. I know there will be someone that translates a nose or a lip with more detail, with more exactness and more skill. But that's not why I do this. I do it because it's hard for me. I do it because sometimes it just really makes me want to use profanities or throw something at the wall. Painting pushes me past my comfort point in my own head and forces me to look at what I can do and if I am satisfied with it. It forces me to make a sound. My sound. This is what I sound like...like it or not."